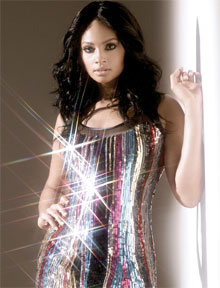 Hello Alesha. Where are you?
Just in my car on the way to the studio. I’m just finishing off the album.

Is it not finished?
Well it’s finished but I’m just making a couple of changes to a couple of songs. Nothing major.

Are you at the ‘mastering’ stage where nothing at all happens to make the song sound any different?
No! [Laughs] There are a couple of lyrical changes in a couple of songs.

Why are you changing the lyrics? Have there been events in the news to make radio not play your songs?
No! Hahaha! The album isn’t finished yet but it will be soon.

You need to get on with this Alesha.
Are you telling me off?

You’ve had a long time to do this and it seems you’ve left it to the last minute, like a boring essay.
I haven’t missed a single studio session!

When we tried to call earlier your voicemail message was a man saying ‘Alesha can’t come to the phone right now, she’s busy making hits’. Who was the man?
When I went to work out with the Red Zone guys, it was one of the musicians in the studio! He did that for me and I had to record his voicemail in a posh English accent.

Aren’t you supposed to be the voice of youth?
Actually I went to a women’s seminar yesterday full of politi­cians and people like that and I felt very out of place there.

Were you roped in as someone who was ‘down with the kids etc’?
[Guffaws] Something like that, yes. But it was a large debate.

A large debate?
Yes. It was good. The question of the debate was, ‘Why be Marie Curie, when you can be Katie Price?’. It was basically about women in today’s society and the things they aspire to do in life. It was a womanfest. Gordon Brown’s wife was there, giving a little speech. She was nice.

And you were there saying, yes, why would you want to spend all your time in a gloomy chemistry lab when you can be out and about at parties and shagging Peter Andre?
I wasn’t agreeing with it! [Laughs] There was a dis­cus­sion about culture having changed and having become more focused on the end results, like cars and clothes, instead of the talent that earns those items. One of the things in the seminar was about women not having any superhero role models to look up to. And I was like, well, I’m not against women having those positions but you have to accept that men are just better at some things. Like being superheroes.

Well let’s be honest, women simply can’t fly.
Women by nature are more gentle, nurturing creatures and men by nature are more strong and aggress­ive. So when you see a man in an action hero role it just fits because you don’t expect to see a woman going around kicking arses. Just because a man is doing something, it doesn’t mean a woman has to do it. I don’t want to see action women! Let’s just accept that women and men do different things. Women are loving, more emotional…

What about lesbians?
Hahahaha don’t start! Men are very practical… Very strong… They can see things in black and white whereas women see the colours in between.

We’re basically going back to caveman times with this, aren’t we? Man hunts down beast for woman to cook…
It’s a ste­reo­type but that’s what used to be the case back in the day. Now women want to do everything men do. That’s not wrong but women just can’t do everything on a par with men. That’s why you’ll never have a female sprinter run as fast as a woman.

Let’s move on to more important matters. If you’ve got a problem with a boyfriend not doing the housework, why not just get a cleaner rather than just banging on about it all the time?
The solution, let me tell you, is to just clear it up yourself. I wouldn’t hire a cleaner!

If you do it yourself doesn’t that lead to an array of passive aggress­ive cleaning arguments?
To be honest I wouldn’t accept a man who didn’t do any housework.

How much housework does a man need to do to ‘get with’ Alesha Dixon? Half?
He just needs to instinct­ively clean and to know it’s not just one person’s respons­ib­il­ity. Clear up after yourself.

Presumably a lady with nice frocks, like yourself, would prefer that The Man did not go anywhere near the laundy.
In case they dye my clothes?

Not just that. Wrong tem­per­at­ure washes, handwash items chucked into the washing machine, the full gamut of laundy-related catastrophe.
I’ll tell you what men are good at – they’re good with Hoovers, and they’re good at clearing up kitchens. They are NOT good at making beds.

Why not?
Oh I don’t know, they just don’t do it right. They don’t do it like you get in a hotel.

If you don’t like it, Alesha, go and stay in a hotel.
[Guffaws]

Why wouldn’t you employ a cleaner? Is it a moral decision or are you a skinflint?
I’m quite capable of cleaning my own house.

Surely as a creative spirit you find this a difficult decision. On a Saturday morning for example you could spend two hours having a clean, or you could spend two hours writing what would end up being the greatest pop song of all time. A song which would bring joy to millions and millions to your bank account. Instead you’ve got your hands down the bog.
You know what, though? When you’ve been working all week there’s nothing better – well, there are some things better – than cleaning up. Going home and just doing the normal things, vegging out on the couch. It’s quite nice! It is!

When high street elec­trical store Dixons changed their name to Currys Digital, did you feel that your place in the public per­cep­tion had altered slightly, and did you consider changing your name to the double barrelled and therefore posh Alesha Currys-Digital?
[Laugh that rattles the windows] I like Dixon. Dixon works for me. I like seeing my surname in big bold letters. I would shop in Dixons just to support Dixons. Currys Digital is not as good as Dixon. Currys Digital? Crap.

Thank you very much, Alesha Dixon.