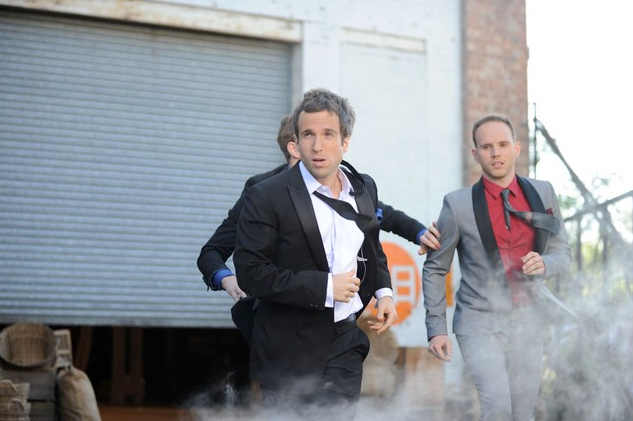 The Hoosiers asked us if we would put their new video on Popjustice. Their last album had some really good songs on it so we said alright, but only if you answer five questions. And they said alright then, so we emailed them the questions and here's what Irwin from the band sent back.

1. You are back, is this correct?
If by back you mean about to get thrust down the eyes, ears, nose, knees and between the finger-tips of everyone with eyes, ears, etc like "the good, old days" then probably not! Not that this is deafeat­ist of me: it's simply that there isn't a major label injecting the campaign with some serious bank … Oh, you just meant "back" as opposed to "not back"? Yes, yes we are.

2. Your last album was better than expected. Is your new one better or worse than people might expect?
That's probably the nicest thing anyone's ever said to me, ever. In this day and age it could be con­sidered a victory that anyone's expecting anything at all. This album has more pop than bubble-wrap but is very much a more adult, live, guitar band making the noise. You're only into music for teenage girls and synths, right? Yeah, you're gonna hate it.

3. Let's talk about this musical or play or whatever it was you did recently. It sounded quite interesting.
Well as you missed it — and there's no existing filmed proof of the "comedy-drama spec­tac­u­lar" (review: model's own) and everyone who witnessed it has been "silenced" — let me tell you it was a the­at­rical triumph. A TRIUMPH! There were tears AND laughter. Sometimes even in the right places. Co-written with (a proper writer) Yasmeen Khan it was about an ageing boyband member having his comeback career hijacked by his superfan.

[This is a song from the musical — it's called 'One Direction' and it's both quite good and quite funny.]

4. When children in schools 150 years from now are taught about your new single 'Somewhere In The Distance', what will be the one message their teachers will want them to take away?
If you hadn't asked that question I'd have told you anyway. As an aside we once did a school's tour. Pulling up in our percussionist's girlfriend's Citroen Xara just didn't send the right message of "cool" to the kids. Do they still use that word? Probably not. Anyway, some wires got crossed and we ended up playing at a pre-school. Five year olds and shit. We dedicated Cops & Robbers (a song of ours) to the local constable who'd dropped by. Mid-way through the song one young lion got over-excited and was rushed out the school hall with a nose-bleed. The future of pop & roll is safe in our hands. I digress. The real answer would be: to love everyone better. All of the time. Naturally.

5. Why do you think the UK has been slow to adopt DAB — is it the price of receivers, the quality of the broad­casts or something else?
You've asked the right person. Similar to the central message of Loki (the baddie in Joss Whedon's recent block-buster "Avenger's Assemble") we humans hate freedom. We'd rather listen to Royal Berkshire Infirmary FM and moan about it than have crystal clear Grimshaw raining rev­el­at­ory beads of truth, wisdom and the top 40 into our ears like the opposite of an ear-syringing session.

Anyway, as the five questions were answered in full, here is the video.

The time has come for MNEK to be a proper popstar