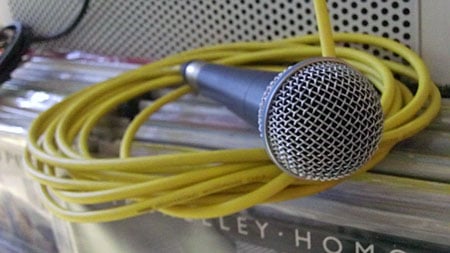 Here is a picture of the micro­phone songstrel Kylie Minogue used to record vocals for her new album.

How do we know this? Because Stuart Price told us so when we VISITED HIS STUDIO LAST FRIDAY TO HEAR TRACKS FROM 'APHRODITE'. *Explodes*

Here are some things we dis­covered on our fact-finding mission to Acton.

FIRST UP: THE SINGLE IS BIG BOLD DANCEABLE PROPER KYLIE.
This is the most important news, because if the singles come in the wrong order the whole thing falls apart. 'All The Lovers' is the comeback single '2 Hearts' wasn't, which is funny because it's written by the same people (ie the artists formerly known as Kish Mauve). In tone it's a bit like 'I Believe In You' (which until now was Kylie's best single since 'Can't Get You Out Of My Head') with a more danceable edge; a confident, worldly-wise voice in 'All The Lovers' replaces the slightly naive optimism of 'I Believe In You'. The song starts off with Kylie quietly singing "dance, it's all I wanna do, why won't you move? I'm standing here with you, why won't you move?". Kylie suggests that the dancing is important "even if it throws you to the fire, fire, fire" and as the HUGE MASSIVE CHORUS storms into view it's clear that the song's not really about relaxing while you dance, it's about relaxing into a rela­tion­ship. In the chorus — backed by a bril­liantly wibbly synth riff — Kylie sings "all the lovers that have gone before, they don't compare to you, don't be frightened, just give me a little bit more, they don't compare, all the lovers". The lyrics might not read like much but they're proper air-punch­ingly euphoric and defiant and a little bit over­whelm­ing in the song. One of the oddities with 'X' seemed to be that some Fairly Fundamental Things had happened in Kylie's life but were ignored in the tunes. Part of this single's like­ab­il­ity comes from its message that "yes, a lot's happened and we've both been around the block a bit but what we have here is properly amazing so calm down and let's just get on with it". After a bit of verse-chorus-verse-chorus action everything drops out for the middle eight where it goes all breathy and intimate and hot and sweaty with Kylie's repeated request to dance then the track EXPLODES into the music from that YouTube clip she put up last week. It's confident and exciting and com­pletely brilliant if not something of a mas­ter­piece and all in all is 'a bit of a moment'. Apparently 'All The Lovers' only really came up in the last three weeks and very quickly took the position of lead single.

SECONDLY: OTHER TRACKS ARE ALSO V GOOD.
Stuart played us a handful of other tracks from the album. 'Get Out Of My Way' could well be this album's 'Love At First Sight'; 'Better Than Today', while similar to the version Kylie performed live last year, now seems to have a punchier, more stompsome pro­duc­tion. Another song Stuart played us even though he wasn't meant to but what are they going to do sack him is a slightly 'Wow'-esque number which has a BRILLIANT 'Stuart Price moment' (you'll know it when you hear it) plus another segment in which everything falls away — Stuart describes this is "the moment in a club when you can hear glasses clinking". How very posh — the clubs we go to put everything in plastics. (NB 'Get Out Of My Way' will sound amazing in the sort of club that doesn't trust its clientele with glassware.)

THE TITLE TRACK IS IMMENSE AND RIDICULOUS AND FANTASTIC.
'Aphrodite' is the title track on 'Aphrodite', hence the name. Stuart likes its 'Rhythm Nation'-esque qualities; we felt there was a slight Art Of Noise-ish, 'True Faith'-ey thing going on. It would have fitted in well on 'X' and would have been one of the album's best tracks, not least for the line "it's the truth, it's a fact, I was gone and now I'm back". It's a lyric that under­lines and puts into capital letters the idea that this, not 'X', is really Kylie's big comeback album. Elsewhere in the song there's a great "I'm going back and forth and forth and back, can you feel me in stereo" hook along with military drums and handclaps. On one listen it doesn't feel like a single but we think it's one of the songs that'll end up defining the album.

PROPER KYLIE IS BACK BACK BACK.
"She's got that glint in her eye," Stuart notes.

SONGS ON THE ALBUM WERE SUBJECT TO A 'PARTON TEST'.
In an inter­est­ing (and slightly demented) twist on the 'old grey whistle test' method of identi­fy­ing potential hits, Stuart and Kylie knew a song would work if it made sense when sung in the style of Dolly Parton. Apparently Kylie does a par­tic­u­larly good Dolly version of 'All The Lovers'. Vocals on tracks that had already been recorded were re-recorded in Stuart's studio and rather than singing in a vocal booth Kylie would sing (using the pictured micro­phone) standing right in front of Stuart. The idea was to give 'Aphrodite' a sense of fun and spon­taneity — and cohesion — that wasn't there with 'X'.

THE BEST SONGS WENT ON THE ALBUM.
Stuart explains that he got involved with 'Aphrodite' last October when he met Kylie in New York for a writing session. From that session "three or four" tracks remain, and from that point onwards he became a very sig­ni­fic­ant force in the album's com­ple­tion. As executive producer he's been respons­ible for shaping the album's sound — at one point on Friday he described it as a 'house­p­arty' record — which has meant a role in deciding which songs did and didn't make the cut but also mixing tracks so they all feel like they're part of the same album. Songs were picked, Stuart says, not because of who wrote or produced them, but because of how good they were. From what he said last week Stuart's involve­ment on a lot of songs has been slightly more than the con­ven­tional idea of mixing a track but slightly less than the con­ven­tional idea of producing it. Basically everything's gone through a bit of a Stuart Price filter so that it doesn't sound like some dickhead A&R has just aimlessly scooped a load of tracks off a shelf, chucked them in a sack, Sellotaped a photo of Kylie to the front, opened his window and shouted "THAT'LL BE £7.99 PLEASE" at people in the street.

NO BALLADS.
We asked Stuart if there were any ballads on the album and he said no (AMAZING), then clarified that point by adding "not in the accepted sense". When we expressed some relief at this, com­ment­ing that Kylie wasn't really known for her ballads, Stuart countered that 'Especially For You' was in fact something of a tune. It was hard to disagree with his point and that's a great example of why Stuart's precisely the sort of person who should be in charge not just of this album but ALL OTHER ALBUMS BY EVERYONE EVER. His "not ballads in the accepted sense" comment may mean that there are some inter­est­ing sort-of-ballad-sort-of-not moments, and 'All The Lovers' does have that slightly sad, crying-at-the-dis­cotheque upbeat dis­co­bal­lad quality everybody loves. Stuart added that some ballads were recorded during the 'Aphrodite' sessions but just weren't quite right for this album and may well appear in the future when there's a place for them.

AND FINALLY: IT'S GOING TO BE A CONTINUOUS MIX
This may not excite you very much but it excited us an obscene amount. In keeping with the 'this is an album not just a selection of tracks' idea, Stuart's currently finding a way of stitching the songs together. The plan is that it won't be a non-stop megamix but there'll be a natural con­tinu­ous flow that creates an 'official' order for the album's tracks. (Stuart didn't say this himself, but we guess it'll be a bit like Madonna's 'Confessions…'.) In an era when fans routinely create their own album running orders in iTunes, present­ing 'Aphrodite' as a defin­it­ively sequenced body of work is a great way of show­cas­ing Kylie's own con­fid­ence in what's shaping up to be her best album since 'Light Years'.

In summary: a truly incred­ible comeback single that'll sit alongside Scissor Sisters' 'Fire With Fire' as a solid gold summer pop anthem, the other tracks sound great, Kylie's on great form vocally, there's no need for anybody to panic about 'X Mark 2' and we can't wait to hear the rest of the tracks. THE END.

A letter from Fyfe Dangerfield

The Newsdump, April 27 2010: from Ke$ha's musing to Sophie not being in the mood for losing