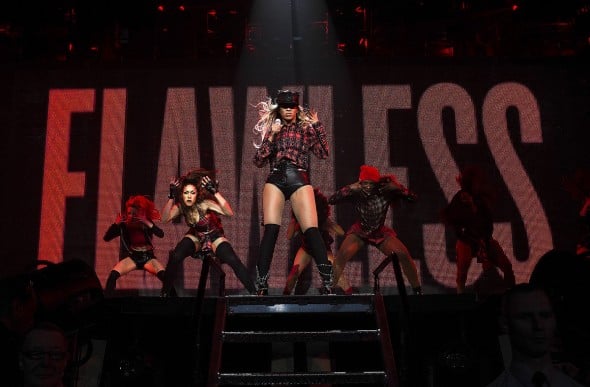 There aren't many popstars who could get away with touring the world without properly releasing any new material (songs on adverts, films or given away for free with a DVD don't count), only to then start the tour again properly once an album did mater­i­al­ise. Yet that's exactly what Beyoncé has done and frankly no one seems to care because a) it's Beyoncé and b) the LOOK OVER HERE YOU GUYS nature of the surprise album was such an injection of amaz­ing­ness into a flat­lining 2013 pop corpse that she could have announced an acoustic tour of Shropshire and we all would have lost our shit. Thankfully she didn't, choosing instead to visit some of the UK's massive arenas and that's where I saw her 'do her thing' over the weekend.

Here's what I learned:

This is basically the Mrs Carter Show 2.0 and Beyoncé seems much happier about it all 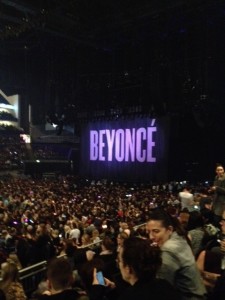 When Beyoncé started the Mrs Carter Show tour in April last year it was in support of nothing but Beyoncé's own star power. A delayed tour for her album '4' in all but name, it was still better than most nights out in an enormous, corporate-sponsored green­house, but there were massive holes where the new songs should have been (as much as we all love 'Flaws And All', no one wants to see that third on the list at a Beyoncé concert). Less than a year later and the show is now starting its second trip around the world, complete with eight new songs, visuals that now make more sense within the context of the new album and a visibly more energised Beyoncé (if that's possible), who is clearly quite excited about singing and dancing along to some new songs. In fact, it was the new songs that stole the show, spe­cific­ally a Jay Z‑assisted 'Drunk In Love' (the "LOOOVVVEEEE" bit was sung by the crowd like a football chant), the Studio 54-tinged 'Blow' and the chair mounting 'Partition'. Oh and 'Heaven' into 'Halo' towards the end might have made some people near me cry like babies.

You can buy a Beyoncé money clip 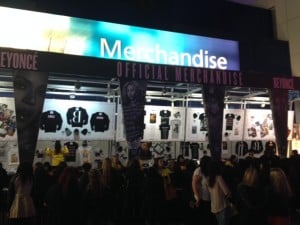 Obviously the first thing you do when you arrive at the O2 for a concert by a popstar is check out the mer­chand­ise. In fact, it seemed like most people there were doing that, with girls taking selfies so that a black sweat­shirt with the word 'SURFBOARD' could be seen in the back­ground (the sweat­shirts were FIFTY FUCKING SHITTERS by the way!). Along with the sweat­shirts, tote bags, t‑shirts and glossy programme (the same one as the last tour, 'FYI'), you could also get a keyring for a tenner, some Beyoncé-branded sunglasses, two different types of bobble hat and a 'gold' money clip which you wouldn't actually need anymore because you'd be skint. Also, just a bit of advice: DO NOT buy some merch then watch a gig and then when you're high on excite­ment and beer go back to the merch stand and spend even more on a t‑shirt you'll never wear. Just don't do that.

She's a massive fan of 'Why Don't You Love Me'

'Why Don't You Love Me' was the ninth (NINTH!) single to be released from 'I Am…' and peaked in the UK at Number 51. During a set that involves lots of stop-start bits and songs being curtailed early — the quite popular 'Crazy In Love' lasts for about 50 seconds before morphing into 'Single Ladies', which itself gets about 90 seconds of airtime — the set piece for 'Why Don't You Love Me' drags on for what feels like about half an hour. There's some brilliant pauses for the crowd to go com­pletely batshit mental and lots of band 'workouts', but it feels like a slightly odd choice of song to give so much time to.   I'm all for some #bey­on­cedeep­cuts, but if that's the case it might have been nice to get some of the ones from '4' back ('I Care' perhaps).

The chairs in the O2 need to be sturdier

When I went to see Taylor Swift sing some songs at the O2 the other week a miserable man with two sour-faced children prodded me in the back and told me to sit down. I politely pointed out that we were at a pop concert not a funeral and also that I wasn't actually standing up, but sitting on the arm of the chair (I was only doing that because there were some kids in front of me holding up a massive banner of two cupping hands for the entire show). Anyway, at Beyoncé I noticed there were two kids sat behind me so I decided to sit on the arm of the chair again and in the end my chair dancing got so vigorous during 'Drunk In Love' that the arm snapped right off. Mind you, it made a perfect arm extension for the bit at the end when the house lights came up and everyone tried to get Beyoncé's attention: "BEYONCÉ! OVER HERE! I'M THE ONE WAVING A BIT OF BLACK PLASTIC ABOUT! FOLLOW ME ON TWITTER YEAH!".

When the Mrs Carter Show 2.0 opened in Glasgow it started with the slightly maudlin double-whammy of 'Ghost' and 'Haunted'. By the time it lurched its way into London it had shifted back to 1.0's opening number, 'Run The World', which then flowed into '***Flawless'. Switching around the song slightly by placing the Chimamanda Ngozi Adiche speech at the song's beginning, it meant everyone got to hear what it sounds like when 20,000 people cheer the word feminist when it's emblazoned on a screen the size of a house.

She's not great at sitting on chairs properly 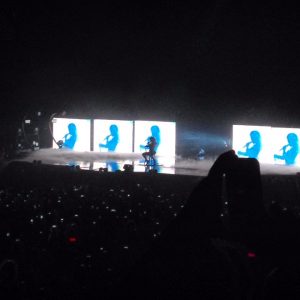 While I was having my own problems with chairs at the O2, Beyoncé didn't seem to be having much luck with them either to be honest. During 'Drunk In Love' she sits astride a simple wooden chair facing the wrong way, which seemed a bit careless, before then swinging her legs about and laying down on it like it was a bed. But that's nothing compared to what happens during 'Partition'. To be fair to Beyoncé it's more of a chaise lounge than a chair, but she still seems incapable of sitting on it properly and even commits the cardinal sin of putting her feet up while wearing shoes. At one point she climbs up the back of it and the swings round and sits on it properly but by then the damage has been done. 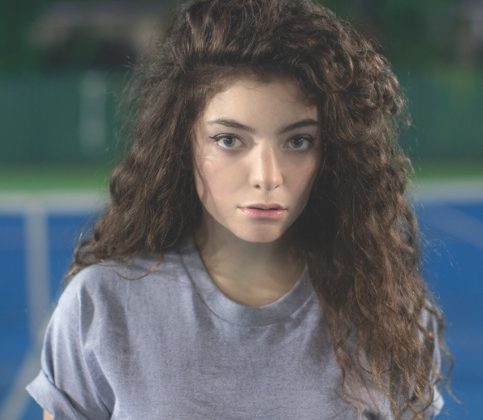 Bits About Pop: From Alexis Jordan returning from hiatus to Pharrell clarifying his genius status 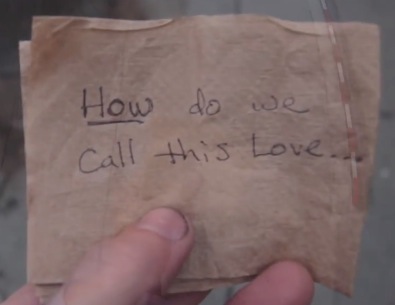 Rixton — 'Me And My Broken Heart' (lyric video)