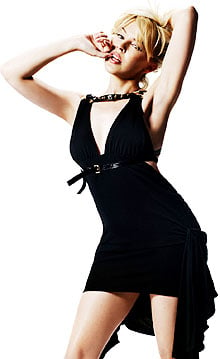 Sometimes it's inter­est­ing to see how household names are presented in other countries.

(You might not think this is inter­est­ing — if so you can just ignore the rest of this story and go and make a cup of tea.)

(March 20th, 2008, New York, NY) — On April 1st, American fans of inter­na­tional pop superstar Kylie Minogue will finally get a chance to hear what the rest of the world is already buzzing about when Astralwerks / Capitol Records releases X ? the multi-platinum icon's tenth studio album and first all-new set of songs since 2003's Body Language.

"This album is much more of a cel­eb­ra­tion than anything I've done before, with some room for reflec­tion as well," Minogue says. "I started work on it a year and a half ago when recording was far off in the future, because no one wanted to pressure me. But I had to get back into the studio just to test myself and get some things off my chest, which I did. To finish was a great relief and an inspir­a­tion in that I knew, 'This is what I do and this is what I love doing.' It has its chal­lenges, but I'm ready for more."

Over the course of her extraordin­ary 20-year-career, Minogue has sold more than 40 million albums worldwide and scored 46 hit singles, including five Top Ten dance-chart singles in the U.S.: "I Should Be So Lucky," "Can't Get You Out of My Head," "Love At First Sight," "Slow," and "I Believe In You." She also won a Grammy Award for "Best Dance Recording" for "Come Into My World" in 2003. Minogue has performed for royalty, inspired a 2007 costume exhib­i­tion at London's Victoria & Albert Museum, and had her likeness rep­lic­ated in wax four times by the world-famous Madame Tussaud's (only Queen Elizabeth II has had more models created).

Minogue shows no signs of slowing down in 2008. She began the year being honored by the Queen with an OBE (Order of the British Empire) for her services to music, and has already earned a host of honors for X, including a BRIT Award for "Best International Female Solo Artist." In May, she will hit the road for a three-month, 50-date European tour, entitled KYLIEX2008.

For its online premiere, X will be available for streaming in its entirety on Minogue's official Myspace page (www.myspace.com/kylieminogue) from March 25th to March 27th.

The art of cataloguing fruit and vegetables, with The Presets