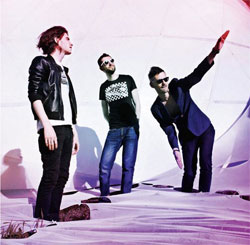 We're big fans of Moscow trio Tesla Boy and have mentioned them once or twice on Popjustice.

They've just finished the video for rather pleasant tune 'Thinking Of You', which'll be the second single from the 'Modern Thrills' album, and sent us an email about it last week.

"It's a col­lab­or­a­tion between people of Moscow and LA who have never met each other and probably never will," they said.

"We thought it could be quite magical if the world premier of the video in question could take place on Popjustice — it doesn't feature any hidden QR codes or recycled Madonna wardrobe but it's quite pop from the heart nev­er­the­less."

Sounds like a good idea, we said. So here's the video.

[youtube]aK36lXlby4Q[/youtube] The single's out on June 28.
Previous Article

Apropos of very little: two Cyndi Lauper tunes from a few years ago

Miley Cyrus — 'Take Me Along'