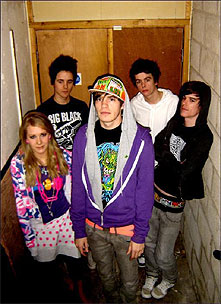 The first Hadouken! single 'That Boy That Girl' was so very amazing that the chances of them pulling a second decent single out of the Day-Glo hat seemed rather slim.

However, against the odds, new single 'Liquid Lives' is equally amazing.

It is about having lots to drink and sometimes some sex and on the rare occasion perhaps a little sniff of poppers.

'Liquid Lives' is better than 'That Boy That Girl' because:

1. It has trumpets on it and 'That Boy That Girl' did not.

2. There are lyrics about someone falling off a horse and acci­dent­ally shooting them­selves. Unless Madonna writes some lyrics about popping her col­lar­bone that time, content of this sort in a pop record will remain a one-off. Apart from 'Pop Ya Collar', obviously, but that was more about adjusting one's clothes. Anyway, we digress.

3. The chorus has a chant of "drink, smoke, fuck, fight!". Again, the first single did not.

It seems Hadouken! have quite a few bad stories to tell about people who do indeed drink, smoke, fuck and fight, and while we do not want to make any assump­tions we would say that they have them­selves probably tried a cigarette in their time, perhaps had a pint and poten­tially even attempted inter­course of one form or another.

ANYWAY, the gist of this is that the new single is very good, but you can't listen to it yet because they have yet to put it up on their MySpace. Perhaps it will be Popjustice Song Of The Day on Monday.

Roisin running through our veins