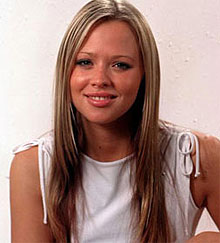 As you know, there has been a lot of spec­u­la­tion that Girls Aloud will split in 2008.

It's not hard to see why some people might think a farewell is on the cards. They have outlived the usual 'three albums and a greatest hits' cycle, there are rumours that the members have fallen out, Nadine's off in America or somewhere ridicu­lous trying to be famous, at least one of them's probably on the verge of getting A Bun in Her Oven. It certainly all seems a bit 'end of days'.

Fortunately, there is now cast iron proof that Girls Aloud will not be splitting: Kimberley's dad John says he doesn't know anything about it.

In a story titled Girls Aloud Not Splitting, the Bradford Telegraph & Argus — people still remember exactly where they were when they heard the news that those two behemoths had merged — quotes John as saying:

"It's just a fantasy. The national papers put this story out every now
and again but it is just utter nonsense. To be honest, Kimberley gets
sick to death of reading them."

In fact, forget those 'national papers' all together — local is where it's at.

"If Kimberley ever tells me that Girls Aloud is splitting up properly, then she would want Telegraph & Argus readers to have the proper story direct from her."

Excellent reporting there from the Bradford Telegraph & Argus. Coming soon:

» Madonna not pregnant again to the best of my knowledge, says Madonna's bin man.

» Amelle is def­in­itely not leaving the Sugababes or if she is nobody has told me about it, confirms woman who had table and chair thrown at her head in a gaudy nitespot by Amelle's boyfriend.

» Look I'm not in any of the band's high level meetings and have no contact with the record label so I'm basically just spec­u­lat­ing here but I don't really think the sleeve of Westlife's next single will have a sans-serif font, says Nicky Byrne's window cleaner.

Britney's 'Piece Of Me': a certified corker