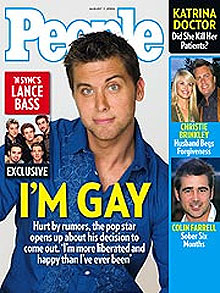 In news that will prompt nobody except People Magazine to hold any front pages anywhere at all, *NSYNC's Lance Bass has come out as being gay.

We're very happy for him and 'all that' but this is getting out of hand — meaning that there are now EIGHT homo­sexu­als working in the pop music industry.

These are just the ones we know about. In reality, the list probably runs to over twelve people.

At this rate there won't be any straight popstars left for people to claim are gay. Although we suppose there will always be Robbie Williams.

The Voice Of Youth