It's funny how music sometimes takes on an unex­pec­ted new meaning, or feels as if it has been given a new sense of purpose, when the person who creates it has passed away.

Sometimes an act might not have made sense in their living years, then when a singer dies or a band splits up you realise there's poignancy in the lyrics, emotion in the chords, hitherto concealed depth and artistry that springs from the notes.

Well there's no chance of that with LMFAO, a band whose music and image feels every bit as shit today, with news that they will be going their separate ways, as it did during the dark years in which Redfoo and SkyBlu cast their long shadow across the Top 40.

Let's just state clearly that LMFAO were not like, say, Pitbull. Mr Worldwide may be one of the world's least bearable rappers but he's still someone who somewhere in the middle of it all has a sense of his culture, his family making it in America, the trouble that kids still have when life looks like it's just going to be abso­lutely worthless and drugs seem like the only answer. So that and more is there if you look for it with Pitbull. It's pretty well cam­ou­flaged, but it's there beneath all the shouting. None of that with LMFAO. Instead: total drivel.

People will say, 'hey, music doesn't need to mean something to be blah blah blah'. And we will say yes, that's a good point well made. Then people will add, 'hey, you can't criticise LMFAO, it was just a bit of fun'. And we will say well actually cri­ti­cising LMFAO is a bit like nuking fish in a barrel, because this band was very, very bad. Pop might sometimes be unbear­able when it's trying to be 'sig­ni­fic­ant' or 'important', but give us that any day over pop that strives as much as LMFAO's did to be so com­pletely meaningless.

'Music for idiots by idiots' is a phrase that springs to mind when LMFAO are mentioned, but that's too simple. Firstly because lowest denom­in­ator pop — in which LMFAO had the dubious honour of spe­cial­ising — isn't really music for idiots, per se. But we do think of it as music made with very little or no respect for the people who like it or (more import­antly) will buy it. The second problem with 'music for idiots by idiots': LMFAO probably aren't idiots. They're probably reas­on­ably bright, and pre­sum­ably sound  enough of mind to be tried in court for crimes against pop. But they were pre­tend­ing to be idiots to sell music to people for whom they had no respect. We suppose the point is that LMFAO's music might not have been bought by idiots, but it was certainly made with idiots in mind, by people who knew exactly what they were doing.

(CAN WE JUST SAY AT THIS 'JUNCTURE' THAT THE 'PARTY ROCK ANTHEM' RIFF IS ONE OF THE MOST EXCITING PIECES OF MUSIC OF THE LAST THREE YEARS BUT THAT'S NOT REALLY THE POINT OKAY SO LET'S JUST MOVE ON.)

Quite recently we found a way to deal with the spectacle of an LMFAO per­form­ance, with specific focus on Redfoo. It was to imagine that you were wit­ness­ing a 37-year-old man enduring a nervous breakdown. And when we started to think about it like that, the whole thing started not to seem as bad. It wasn't an assault on everything we cherish about the concept of culture, it was just a sad, unfor­tu­nate episode in one man's life. Some people quit their jobs or have affairs or buy motor­bikes or whatever. Berry Gordy's son had a breakdown through pop.

Once you think about LMFAO in those terms it's hard to put the notion to one side, but pre­sum­ably Redfoo isn't actually having a nervous breakdown. Although he's def­in­itely 37, with his nephew Skyblu ten years younger. People make a big deal out of popstars' ages and it's usually for no good reason, but when they're pre­tend­ing to be teenagers things do get a bit weird. To their credit LMFAO did a pretty good job of it, but when you add the fake child element to the real-life nephew/uncle rela­tion­ship you end up with what always struck us as being bit like a pop version of The Krankies, except with the less-than-savoury subtext that you might expect to find Redfoo and SkyBlu shuffling in the most dis­taste­ful way on each end of some unfor­tu­nate college girl.

Earlier this evening we asked some of our Twitter followers for their own personal memories of LMFAO's most life-changing moments.

The responses really do bring a tear to the eye.

"The bit when madonna jumped on one of their shoulders and it looked like she had a massive bush."
- Sophie Wilkinson

"I met them once at R1 and they were really friendly. Shook hands with everyone."
- Huw Stephens

"They were super annoying."
- TheLastSugababe

"He had hair I wish I could grow but deep down know it wouldn't suit me, I'd look like a Troll pencil top."
- Kris De Souza

"The first time I saw Natalia Kills on TV was with LMFAO. Brings a tear."
- Rootless Diamond

"I liked that they had a line of t‑shirts in both Primark and Zara at the same time."
- Paul R McDonald

"Partyrocking was easy to edit TV trails to."
- Clare Burton

"They threw their pants at me once. They didn't smell good."
- Scott Mills

"Sexy AIKI was the theme tune to a friend's hen do earlier this year. Due to the 'I've got passion in my pants' line, we got random men to wear women's knickers over their trousers whenever the song was on (and actually through­out the night too)."
- Carmel

"The way they rhymed Coronas with Kahunas. They just had such a way with words."
- Nick Bassett

"I remember eating my first pack of Salt & Vinegar Discos in ages a few months ago and Party Rock Anthem came on The Box."
- Colin Roberts

"Their music makes me shit."
- Matt

"An awkward turkish man who was clearly on drugs danced over to us to 'party rock anthem'."
- Rob Ryan

"They were on stage as we arrived at Hyde Park. By the time we got a beer they were done."
- Paul White

"Once I was 'parting rocking' to the anthem so hard I smacked into a bloke and made him drop his pint. But he just 'shuffled'."
- Emma

"They were sup­port­ing Ke$ha but only one of them turned up so I went for a shit."
- Squibby

"I once saw a middle aged man knee a small child in the face whilst he was 'party rocking' at a wedding."
- Elliot Mitchell

But where next for the former members of LMFAO?

Well, Redfoo has already explained that he will continue to make music, which is good news if you like the really rather good work he's done on the recent album of another of pop's premiere pretend teenagers, Carly Rae Jepsen. And it's bad news if you take into account his assertion that “all the music that I’m going to make is always going to be LMFAO-ish”.

But whatever happens in the long run, for the fore­see­able future there will be two wanker-shaped holes in the Top 40.

Farewell, LMFAO. You were shitty and we knew it. The offensive thing is, so did you. 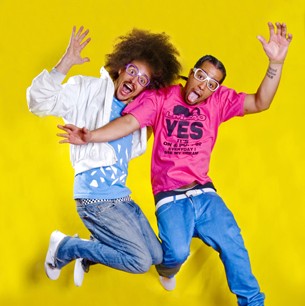 LMFAO are splitting up (for a bit)