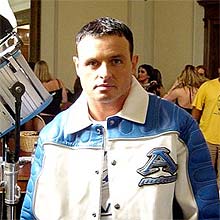 In 2006 Daz Sampson — rapper, song­writer, DJ, polymath — rep­res­en­ted the UK in the Eurovision Song Contest with 'Teenage Life', his dazzling post-mil­len­nial update of Pink Floyd's 'Another Brick In The Wall'.

This year, he went for it again, and recorded a brand new song.

He roped in Russian solo star Anna Semenovich for vocal duties. He wanted to represent the UK once again because he knew it was his destiny. But his hopes were thwarted when the BBC banned him from achieving this dream. (By 'banned' we mean that he basically didn't make the 'Eurovision: Your Decision' shortlist.)

Those of you familiar with Sampson's oevre may be surprised to hear this this is not the standard Daz Sampson offering. There is a sadness to this song; a mournful quality which prompts the listener to consider the trials and injustices facing the pop­u­la­tion of this planet. In many ways it is a protest song — an anthem for those who have been wrongly imprisoned, for those who are robbed of their right to free speech and for those who dare to speak out. In a more focussed way, the listener is also invited to muse on the sad inev­it­ab­il­ity of their own death. That is not to say that the song is without its own unique sense of optimism and hopes for a brighter tomorrow. Like any piece of social com­ment­ary which immerses itself in the harsh realities of the present it also casts a cautious eye to the future. It does this because humanity finds a way to move forward. It always has and it always will.

This is 'Do A Little Dance'.

Daz says it's alright for you to download the whole thing, so here it is.

Girl overboard: you predict the future for Girls Aloud