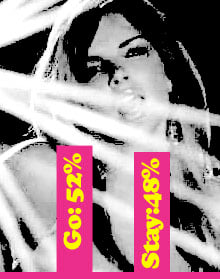 Considering Girls Aloud are the jewel in the UK's pop crown, the outcome of our Popjustice poll into whether Nadine should be sacked is quite a shocker.

52% of viewers voted for Nadine to be given the sack.

In case you were out of the country for half term, here is the story so far: Nadine failed to show up for the Brit Awards last week, despite the band being nominated (for the first time ever) for Best Group. She claimed to have lost her passport. We asked Popjustice viewers if her employ­ment with Girls Aloud should be ter­min­ated.

As well as asking whether Nadine should be given the boot, we also asked how Girls Aloud should find a replace­ment. Here's what you thought…

OPTION A: DRAFT IN A SUGABABE

Well, one of the most popular options for dealing with the potential vacancy of Girls Aloud's supposed vocal power­house is to employ a pop singer with some degree of previous exper­i­ence — after all, this is no junior role which needs filling. Popular can­did­ates for this mostly included past and present Sugababes – with Mutya and Keisha the most often named. "Mutya is readily available after her big splash of a solo career," says one Popjustice viewer. "Plus she has girl band exper­i­ence, could take you in a fight and has a half decent vocal ability, ie everything you need to be a Girls Aloud member." Unfortunately Keisha seems quite happy in her current job and Mutya seems content not working at all, which is a shame because Sugababes and Girls Aloud in the same band would be the stuff of tabloid showbiz editors' dreams.

OPTION B: FIND ANOTHER SOLO FEMALE

Another popular if ethically dubious option many of you chose was to clone Nadine. While suc­cess­fully attempted on a sheep once or twice in the past ten years, cloning is a sci­entific procedure yet to be suc­cess­fully performed on a human being – let alone on one with a voice powerful enough to stun cattle three villages away — but this did not deter viewers from making wild sug­ges­tions regarding this even­tu­al­ity and how it should be approached. "They should syphon off a small amount of her DNA and grow an eerily perfect clone," one reader noted. "At this point she should be brain­washed into believing that Girls Aloud are indeed the only important thing in her life, and the rest of the band can then claim that the 'solo' Nadine is a fake in order to discredit her solo career."

OPTION D: GO ON THE TELLY

Considering Girls Aloud's origins, the notion of seeking a replace­ment through the popular medium of prime-time tele­vi­sion and a telephone voting system was sur­pris­ingly divisive. Calls for Girls Aloud to hold their own TV show along the lines of 'Search For The Next Pussycat Doll' clashed with cries that doing so would ruin the hard work put into their six-year career. "It would make a mockery of what is now such a credible band," noted one viewer.

OPTION E: DO NOTHING

However, the most popular option for dealing with Nadine's dis­ap­pear­ance is also the most simple: find no replace­ment. "With Nadine gone, there's one less girl to block Nicola from the front-and-centre limelight she deserves," said a viewer, "plus they could always tweak Cheryl's voice in the studio to sound like Nadine's".
"Four girls would do perfectly fine on their own," agreed another viewer. "Maybe finally Xenomania will explore more of their voices, instead of relying entirely on Nadine." Another viewer was keen for his favourite member of the band to be shunted under the spotlight: "Don't bother about a replace­ment — get Nicola on lead vocals. It's her time to shine properly".

Of course it is possible that Nadine is simply very forgetful when it comes to simple matters such as a) passports and b) remem­ber­ing what it is that she does for a living. After all, she has posted a very apo­lo­getic message on Girls Aloud's MySpace and, as we all know, popstars never lie.