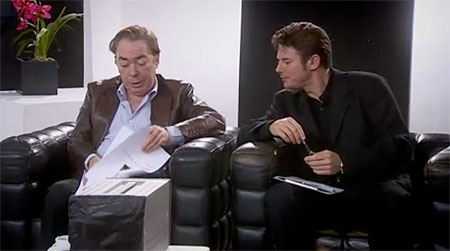 Eurovision: Your Country Needs You started on BBC1 on Saturday. In the picture above you can see Andrew Sir Lloyd Webber and UK Geffen President Colin Barlow 50 minutes into the 55-minute show, carefully mulling over some of the entrants who've been gradually and painstak­ingly whittled down over the course of various auditions and workshops… Shortly before the voiceover announces that "at the last minute the casting team has brought another entrant to light" and 21-year-old Jade, a former member of Sony BMG-signed girlgroup Trinity Stone, mys­ter­i­ously appears and is imme­di­ately picked for the final six.

Do you know what, viewers, if this programme had been made by a company any less reliable and above-board than the British Broadcasting Corporation we might be wondering whether there was something slightly odd about that.

There were some great bits in the show, like Sir Llord Andrew Loyd
Webber trying to put an end to tactical voting by, er, flying around
the world telling people to tac­tic­ally vote for the UK. These demands were, of course, being made before the UK's song or singer were unveiled — a brilliant illus­tra­tion of the pomposity
and arrogance that says it's alright if it's rigged, as long as it's rigged
in our favour. After all those funny for­eign­ers can't be trusted to vote normally because they clearly don't under­stand that it's the UK's right to do well at Eurovision — regard­less of song or singer — because we invented Cliff Richard and The Beatleszzzz.

Then there's the overall concept that 'this year we're taking it seriously', which simply doesn't work alongside the Carry On Austin Powers 'war room' schtick, or the scenes of an 'ambassador's reception' with a Ferrero Rocher pyramid. Presumably the BBC want to seem as if they're taking it seriously so that if our entry does well they can claim a victory and get on with com­mis­sion­ing next year's series, but they also want to make sure they're covered if it all goes horribly tits up. ("Well of course we weren't taking it com­pletely seriously etc etc.") Still, it's six weeks of Saturday night judge-based, phone-in-friendly tears 'n' tantrums filler, right? Could be about picking the new Milky Bar Kid, could be about selecting someone to get the leaves out of Arlene Phillips' gutters. Doesn't really matter what it's about as long as it keeps Graham Norton off the streets.

So — who's going to Moscow? We'll run through the con­test­ants later but you can check them out on the BBC website if you simply can't wait for our hilarious and irrev­er­ent 'sideways look' at the shortlist…