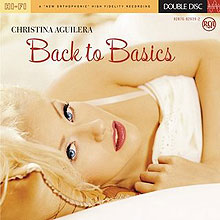 We are reading an amazing book at the moment. It is called The Future Of Music

and it is all about how the record industry as we know it is dead (boo!) but how everything is actually going to be alright (hurray!). It could do with a few more pictures but it is quite interesting.

Anyway, one of the central arguments of the book is that record labels should not try and put the 'genie' back in the 'bottle' (don't get your hopes up, this is not leading to a hilarious Christina joke) and that there is no way for record companies to stop people down­load­ing albums.

The authors clearly did not bank on the new album from buxom pop warbler Christina 'Christrina' Aguilera. The double album leaked yesterday and, unex­pec­tedly, it seems Christina has figured out a way to stop illegal downloading.

Here are the key points of Christrina's new approach to battling online piracy.

'Adendum': The album is actually quite good but there is not a single one of you who won't put together their own 11-track version in iTunes and com­pletely bin off the rest.

Surely the news story of the week