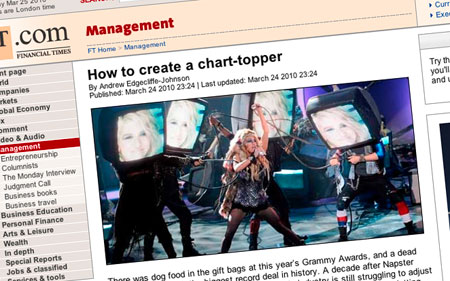 There's an inter­est­ing article about Ke$ha in the Financial Times today (via ROTD).

It iden­ti­fies Ke$ha and Lady Gaga as the two acts who are "vying to be the heirs to a pop throne not yet vacated by Madonna, while firing up digital com­munit­ies of fans in a way that was impossible 20 years ago".

Barry Weiss, who signed Ke$ha, has this to say: “Ke$ha’s going to be this year’s Halloween dress-up [costume]. Last year it was Gaga. Ten years ago it was Britney [Spears]. That’s how big this feels.”

Plenty of Weiss' other comments about the pop market make more sense, however, and this part is par­tic­u­larly interesting:

Mr Weiss is already cal­cu­lat­ing how his new digital phe­nomenon will compare to Spears, a star from the cassette era. “Britney went on to sell 20m [copies of her first album]. We’re not going to do that . . . But we’re going to do 5m in America alone and we’ll probably do 8m-10m worldwide.”

The new Kelis teaser video: it's a triumph

That iamamiwhoami song is on iTunes, by the way