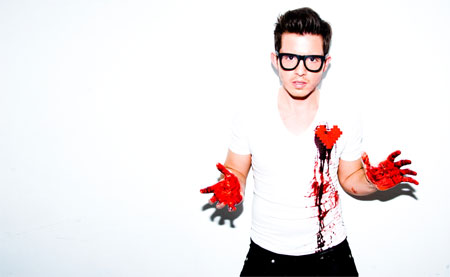 We've got Simon Curtis' 'Beat Drop' as today's Song Of The Day. Popjustice readers with good memories might remember Simon from a few years ago — we posted a download of one of his early songs in 2007, and jolly listen­able it was too.

In the time since he's wrestled with his musical identity and become more com­fort­able with his personal identity and the result is an album called '8bit Heart', which could be adequately described as the work of a tougher, younger relation of 'The Tension & The Spark'-era Darren Hayes. It's not up to the standard of 'The Tension & The Spark' and, it must be noted, '8bit Heart' does come with some downsides. A lot of the album is sonically over­styl­ised (it's a bit like the clunkily 'fash­ion­able' frames Simon's wearing on the album's sleeve, which just feel like they're trying too hard), the lyrics sometime seem unne­ces­sar­ily con­font­a­tion or over­wrought, and there are moments on the album, like there are on most of the elec­tronic pop songs we get sent, which just seem like posturing.

THIS SAID, what's good about the album makes it well worth the download. We get sent a lot of unsigned pop music. Some of it's great and we write about it, some of it's great and we forget to write about it. But there's a huge amount of elec­tronic or 'club'-flavoured pop that is simply no good. It does a good trick of sounding good or looking good, and it's tempting to link to it, but it feels wrong to give any real or implied seal of approval to music like that because ulti­mately the tunes are poor, the lyrics are awful, the pro­duc­tion is boring (even when it sounds 'exciting') and there's a space where its heart should be. It's music that seems to be there for no reason. Even at its worst the Simon Curtis album feels like it has a reason to be here; at its best it's a smart, sometimes funny album and, in the case of a few tracks, well worth repeated listens. And really, we'll take an overam­bi­tious pop album over a lazy one any day of the week.

You can get the whole album as a free MP3 download at Simon's website. We know there's a lot of free music around at the moment and most of it's severely over­val­ued but this one's worth a few minutes of your time, even if you only end up keeping a couple of tracks.

A quick mention of Sunday Girl being amazing