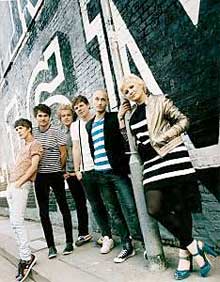 Interesting news about Alphabeat's next single 'Boyfriend'. Pete Hammond, the producer and 'mixmaster' who had a hand in almost every Stock, Aitken & Waterman track on the face of the planet, has turned in his own remix of the track — and it's great.

The new version an affec­tion­ate and (we think) really brilliant mix which as well as being totally authentic-sounding (Pete used the same equipment he used when he was at PWL, and even roped in the old session guitar player who worked on songs by Kylie 'et al') is the perfect match for a band who've already ref­er­enced pivotal 80s tracks like 'Footloose' and 'The Safety Dance'.

It could easily be a long lost PWL classic unearthed from down the back of one of Pete Waterman's filing cabinets and the new pro­duc­tion, blended with Alphabeat's really-quite-good song­writ­ing, puts it on a par with some of the best PWL tracks, rather than the naff arse-end of the SAW catalogue which has unfor­tu­nately become syn­onym­ous with the '80s hitmakers'.

Anyway, here's a quick blast of the mix.

No news yet on whether the Pete Hammond version will be part of the official remix package, but it's 'cool' in a really clever way and it'd be shame if it didn't make its way into the public arena, in all its seven-and-a-half-minute glory, in same way or another.

Annie's 'Songs Remind Me Of You': amazing