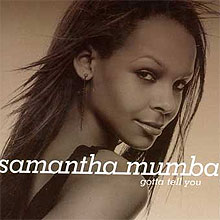 When she was a child (ie about 17) a young popstrel from Ireland decided to release some pop songs. One or two of Samantha Mumba's singles (to be precise: three of them) were quite good and the first of these was 'Gotta Tell You', which wasn't so much 'quite good' as 'totally mind­blow­ingly good'.

The fact that 'Gotta Tell You' was totally mind­blow­ingly good meant it was a hit — hurrah! — in the UK and, somehow, in America.

It all went wrong, as it always does, but now she is virtually pen­sion­able (ie about 25) Samantha has decided to get involved with a frankly shit new version of 'Gotta Tell You' which puts the original on a crash diet of alcopops and Wham! bars and somehow turns 'Gotta Tell You' into a glow­sticks-aloft Cascada song.

Except it's not by Cascada, it's by 'Micky Modelle'. Samantha's made a video.

Scandipop made a good point about this on the Popjustice forums last month. "Samantha Mumba always took herself very seriously, and
mocked the less credible pop acts. So it's actually a joy to watch her
do now what she would have berated another act for doing back when she
was suc­cess­ful. There's no shame in doing reality television,
touring the gay club circuit, and steering your music in a dance music
direction (long asso­ci­ated as being the last chance genre of a female
artist). But Samantha will be doing it through gritted teeth, blaming
others for her career being at this stage, and wishing she was playing
any other stage, to any other crowd, on top of ANY other backing track."

Thing about The Pipettes