This is a queue literally 'around the block' for Frankmusik's first ever live show last night. 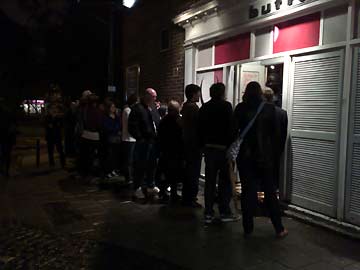 To be honest we were pissed off our tits by the time Vincent took to the stage at 8.30 so it was all a bit of a blur but we remember the fact that it was good and that there were lots of A&R 'types' there, meaning that a major label deal and pro­ces­sion of costly pro­mo­tional items must surely be only weeks away. He performed four songs (we think — it might have been five) and was wearing a nice stripey top.

After that it was off to London's Fashionable East London to see Dead Disco (who — spooky! — have been remixed by Frankmusik) per­form­ing at Cargo. 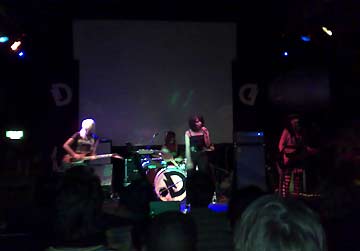 That is without a doubt one of the shoddiest pho­to­graphs Popjustice's pro­fes­sional pho­to­grapher has ever delivered and you will not be surprised to hear that he is now on his third verbal warning. Dead Disco are really enjoyable live and the songs, as they say, 'really come to life', although the fact that Victoria sings and plays her keyboard side on to the crowd takes a bit of getting used to.

After Dead Disco cleared off — and we were really quite drunk by this point — good old Dragonette took to the stage. 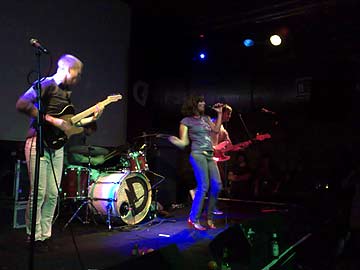 The band are currently sporting a more casual look which suits them a lot more than the whole 'sexy' business they were doing before. Songs are still amazing, band are still great live, etc etc etc.

Anyway, that is what we did last night. What did you do? TELL US NOW.

Apropos of not a great deal