We did one of our 'blind listening' sessions in the office this morning. This usually consists of a new song being put on the Popjustice stereo and the rest of the office having to guess who it's by. 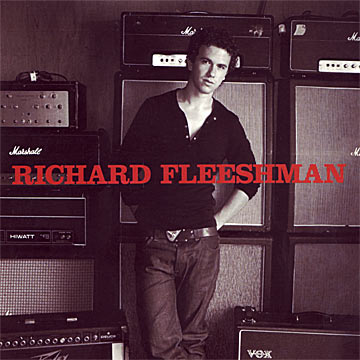 But they did say that they thought it was quite good. As you can see from the picture, Richard Fleeshman is a SERIOUS AND ROCKING solo artist. That or he works in a music shop.

The song is very pleasant in a sort of James-Blunt-but-nice-to-listen-to sort of way. We have listened to the song four times so far today, and a Joy Division album only once, meaning that Richard Fleeshman is four times as good as Joy Division.

The single is called 'Coming Down'. It is not about drugs. The chorus is in fact about "it's coming down like chocolate stars in the Sun". We don't know very much about chocolate stars (…) but it is probably a bit like the olde tale of Icarus' brother who made his rollerblades out of melted Twixes and then skated too close to the Sun and oh we don't know what we're fucking talking about.  One person in the office suggests that it might be like when he comes out of the toilet and says to the rest of us "I'd give it a few minutes — it's been coming down like chocolate stars". It might be that. It's probably about love.

More import­antly, do you think 'The Fleesh' might get the GHDs out again for the second single?