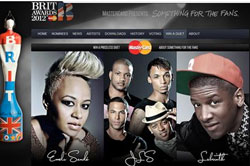 MasterCard have launched some sort of karaoke-type 'Priceless Duet' com­pet­i­tion to sing with either JLS, Emeli Sandé or Labrinth on some TV adverts that will be shown on the night of the Brits. (Marketing Magazine)

Make a vital note in your diary: Soulful Artiste Rebecca Ferguson has announced that her next single will be 'Too Good To Lose', which will released February 26. (enter­tain­ment wise)

Although she hasn’t had any contact about it as yet, Retired Popstar Lily Allen says she "would be honoured" to perform at the poten­tially-in-the-works memorial concert for Amy Winehouse. (Contactmusic)

Justin Bieber doesn’t want to swear and sing about sex and drugs as he's more "into love, and maybe I’ll get more into making love when I’m older". (MTV)

This is a fairly excru­ci­at­ing interview with American Idol judges Jennifer Lopez, Randy Jackson and Steven Tyler. (YouTube) Skip to 58 seconds in to watch them squirm when asked awkward questions about Ryan Seacrest’s involvement.

Cher Lloyd may soon be known as Cher Monk, as she has 'appar­ently' got engaged to her boyfriend. (The Sun) Get up the AISLE der-der-der-der etc.

And finally, Jay‑Z backing vocalist Blue Ivy has no reason to fear: 'Auntie' Kelly Rowland has got her wardrobe covered. Rowlo took a shopping trip to New York’s Lucky Wang (?!) and bought a pastel green babygro "onesie" with a picture of Bob Marley on the front. (Daily Mail) So stylish.

Florence + The Machine will be touring a lot in 2012

Madonna's new single should be on the radio soon