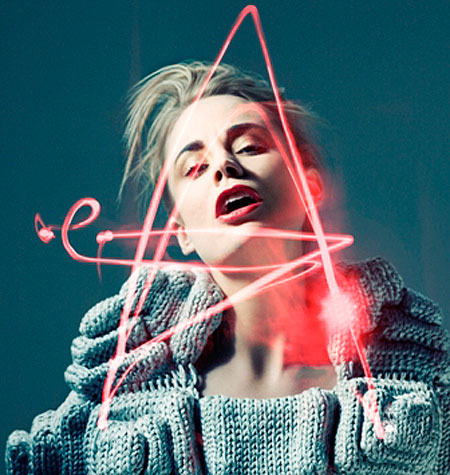 After a false start with Island Records Annie's fantastic second album 'Don't Stop' is now getting a release. It's out in two months, a few tracks have dis­ap­peared and a few more tracks have taken their place.

A col­lec­tion of sublime hooks stirred into a melting pot of blazing pop beats, singalong choruses and some odd, twisted darkness here and there ‘DON’T STOP’ is the POP SOUND OF NOW!

‘DON’T STOP’ is ANNIE’s second album and high­lights that she is right at the forefront of 2009’s bril­liantly varied musical landscape. It’s an album that sounds both instantly catchy and utterly beguiling, main­stream and under­ground all at once.  A totally inde­pend­ent and self-created artist, ANNIE is a rare popstar – one who has written and created her own album – as well as per­son­ally assem­bling her own team, including her producers and musicians.

Complementing ANNIE’s pick ‘n’ mix, Pitchfork-to-Popjustice, gen­re­hop­ping pincer movement are an array of hand­picked asso­ci­ates: ‘DON’T STOP’ reunites ANNIE with Timo Kaukolampi and Richard X — col­lab­or­at­ors from her debut album – and intro­duces a host of new friends like Paul Epworth, Xenomania and Franz Ferdinand’s Alex Kapranos. It’s an eleven-course feast for the modern musical con­nois­seur, an effort­less blend with ANNIE centre stage, the NME declaring ‘with ‘poppy’ becoming every Indie ne’er-do-well’s buzz word there may be some confusion as to what good pop actually is. Answer: Annie.’

‘DON’T STOP’ makes perfect sense of pop’s brilliant extremes; this is, after all, the work of a woman whose cat Joey was named after her favourite Ramone and her favourite New Kid On The Block.