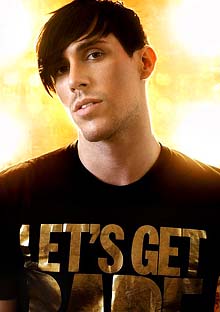 "I could very happily wear a swan"

Poor little Sam Sparro never felt at home with the beautiful people in LA and has been trying to live in London since he was a teenager. Perhaps his amazing 'Black And Gold' single will help fund the move.

Hello, Sam. Do you have an exciting life story or are you just a man making music?
That's a leading question. I was born in Australia — my grand­par­ents are musicians. My grandad used to play trumpet with Frank Sinatra and Sammy Davis Jr. My dad was a gospel recording artist and when I was ten years old he signed a deal in the States and we all moved to LA, where the beautiful people live.

Did then ten-year-old Sam Sparro enjoy LA?
I didn't really like it that much, no — it was hard for me to fit in and make friends at that age, so I ended up leaving school when I was 16 to go back to Sydney and live with my grand­par­ents. Then I saved up a bunch of money, moved to London and was making elec­tronic music in my bedroom and recording songs in between temping. But I spent all my money. I was broke and had to go back to LA. I didn't really have much choice!

Apart from fitting in with whatever t‑shirt you happen to be wearing at the time, what is the relevance of the black and the gold in your single?
Someone in the LA Times called the single 'an exist­en­tial pop song', which it is. The song is about a night when I was looking up into the sky.

Was there anything inter­est­ing in the sky?
I was thinking about where we come from and where we're going – is there a God? Is He there? And black and gold was the colour of the universe.

Did you get any answers? It sounds like you might have been on 'the sauce' to be honest.
Sadly there were no answers. I've never even seen a shooting star and I've never seen aliens! I did see Alec Wek the other day but she's not an alien, unless she is a gorgeous African alien. She wasn't in the sky either, she was in a club in North London.

Does your LA upbring­ing mean that you only mix with beautiful people?
I prefer London's ugly people. They're much funnier.

Is everyone going to listen to your album and go 'this is rubbish'?
'Black And Gold' is def­in­itely one of a kind, we didn't try to duplicate that song. When I write, I never think too hard about what I'm doing. I just let it happen. There's some stuff on the album that is along the same lines – dark, soulful and elec­tronic. There's more throwback 80s funk — it's really cool, a good mix. It's a fun album, pretty thought­ful and honest.

Do you have aspir­a­tions to be a really fucking huge popstar?
I am def­in­itely someone who likes to stick to their guns and it's not easy to make music for yourself and be a worldwide popstar. I'd never put out an album that sucks just because it is going to sell a lot. I always imagine myself somewhere in between a popstar and someone like Bjork, a bit avant-garde but with a good fanbase – doing stuff I want to do and being able to experiment.

Like wearing duck costumes to award shows?
I could very happily wear a swan.

Have you extended your appre­ci­ation of the UK to anywhere beyond London's fash­ion­able club scene?
I love north­ern­ers. I have a thing for northern people, I think they are really genuine, funny, warm and sweet. A lot of my friends are from Leeds, Middlesbrough and Manchester. They're just a bit more carefree and not afraid to say what's on their mind. I'm Australian and can be pretty crass, so I appre­ci­ate the openness.

The cultural divide between north­ern­ers and Australians isn't as big as people think, then?
I don't know how well north­ern­ers will take to that but you might be onto something there. They might find it quite offensive.

Yes. Lovely people but you don't want to piss them off.
Exactly.

Thank you very much, Sam Sparro.

Five reasons to vote for Loveshy during Saturday's Eurovision thing

All the gossip (translation: none of the gossip) from the NME Awards