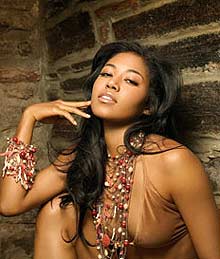 There are three words that sum up the new Amerie album:

Obviously Amerie will sell half as many copies as Beyonce but that is not our concern.

Here are the best tracks from the album along with some thoughts we are having about them.

'Take Control'
The first single. It has Cee-Lo from Gnarls Barkley giving her a hand on the singing but she probably didn't really need the help.

'Crush'
As slow a song as Amerie should ever record. Lots of lyrics about licking things off her lips and getting other girls to kiss her boyfriend (oo-er etc) .

'Gotta Work'
The good bits of 'Crazy In Love' shoe­horned into the good bits of '1 Thing'. You will be sick of hearing this being blaring from car windows by the end of August. And don't even get us started on barbeques.

'Losing U'
There is an instru­ment on this which people use to charm snakes. We could probably find out what it is called but we are quite pushed for time at the moment so if you are inter­ested you can find out for yourself.

'Make Me Believe'
There is a lot of brass on this one. CALL THE MARK RONSON POLICE!!

'Hate2LoveU'
This is exactly the sort of thing that Christina was hoping for on her sprawling 'Back to Basics', just without the threat of anyone breaking into the bloody Charleston at the drop of a hat.

There is nothing on this album which as good as Rihanna's 'Umbrella' but the chances of Rihanna recording a decent album are rather slim, so if you're the odd sort of person who enjoy placing bets on the sales of R&B pop albums, we suggest you have a flutter in this direction.

Here is something cheerful