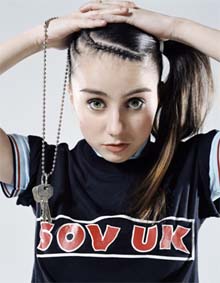 When no one in Britain cared what Lady Sovereign released if Preston from Big Brother wasn't involved, she flew off to America and started boo-hooing all over Jay‑Z and Missy Elliot about it.

Thanks to her big hip-hop friends and some overseas hype, she's one of the biggest British acts in the US and has redefined the image of the English rose in the United States to one of hooded jumpers and the sideways ponytail.

Now, she's giving the UK another crack and decided call to tell us about it…

Lady Sovereign, hello. Are you as suc­cess­ful in the States as we've been given the impres­sion you are, or is the whole thing a made-up PR lie?
Yes, I am. I can't complain at all about how it's been over here. My face is every­where! Everywhere I go people know who I am and it's MAD.

Is it weird?
Well, I'm kind of used to it in the UK but over here it's a bit bizarre.

What do people shout at you in the street?
Things like 'Oh my gosh, it's that white rapper!' And I'm like, 'Well duh, I'm not exactly black am I?' But people are really nice, asking for auto­graphs and things…

We only ask because Nicola from Girls Aloud did pioneer the sideways ponytail in the con­tem­por­ary pop landscape and we were wondering if she was a style icon for you.
Tut tut. That's mine now. If she has it on again I'll go and cut it off.

When were you last so drunk you fell over?
That would have been about three months ago. I was in Tampa. One minute I was drinking with Nick Lachey, the next I was passed out on the floor, I can to be carried to my room, I was sick all over my manager and all down the corridor.

Did Nick Lachey spike your drink?
Well that's been our joke ever since. I doubt it. I just drank a little bit too much. Do you know what, I've been having this little champagne fetish recently…

Oh here we go.
…and it really does fuck you up. I have Red Bull in it though. A nice little cocktail.

Is that how they drink champagne in soph­ist­ic­ated circles these days?
It takes the glamour out of the champagne, the glamour is the worst thing about it. Although it tastes horrible as well. I'd rather drink Jaegermeister to be honest. And then there's the thing that there I am in my songs saying that I don't drink it — I don't like it, I just like drinking it. Oh I'll just shut up.

Were you not scared off working with Dr Luke because of the fact that he usually works with people like Paris Hilton and the Backstreet Boys.
I didn't know until after­wards! (Guffaws) It was after the first session and someone was like, 'He's worked with Kelly Clarkson'. I was like, 'Shit!' But he's a nice dude and he does great work at the end of the day. I'd still have worked with him if I'd known, though. He's great.

Do you use punc­tu­ation in your text messages or is it just a stream of con­scious­ness load of babble?
Wait, let me see — Well, I use commas.

No apo­strophes?
No, commas is about it.

That's a start.
I mean really, if you're going to start fucking around with apo­strophes and things you might as well just ring the person and tell them what you want to say, for all the time it takes.

What advice would you give to the eight-year-old you?
'Don't you dare pick up a packet of cigar­ettes?' Sometimes there's things I wish I didn't do healthwise…

Well, you're still young. If you stop next year you'll be fine by the time you're thirty, or something.
Well they say that but I think if it's too late it's too late.

What would the eight-year-old-you have said back, given that advice?
'Piss off', probably.

What will you do for the rest of today?
Well, it's 4.30. I've actually left the hotel today ' I went for breakfast. I had an egg and cheese muffin with some fries…

American break­fasts are THE BEST THING EVER. With pancakes and things. The only place in London you can really get them is bloody McDonald's.
Do you know what, the only reason I'd go to McDonald's with a smile on my face would be to get a sausage and egg McMuffin. With cheese. I ate three in a row once! I did! Three in a row- I don't get over­weight, though. I don't want to be short and fat!

Tall and fat is better because it's a bit like being a GIANT. If you ever become over­weight, get yourself some stilts. Are you good on stilts?
No.

How about unicycles?
I had a go on one once. That was easy. I can ride a unicycle.

Any other circus talents? Let's say you've been kidnapped by a circus. What would you do?
Ride a unicycle, def­in­itely. And wear a hat. I might ring some bells as well. Yes.

Bell ringing — the main attrac­tion at any circus.
Well, yes.