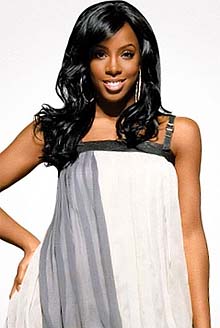 "YOU BOUGHT A PAIR OF SHOES? WHAT TERRIBLE LYRICS…"

Kelly Rowland talks about the 'Work' and her dinner plans…

After a shaky start to her second album, a little inter­ven­tion from Freemasons has put Kelly Rowland back on track with her new single, 'Work'.

Becase 'Work' looks like being a fairly reas­on­able-sized hit soon, we thought we should let you know what happened when we spoke to Kelly at the end of last year. Here is what was discussed…

Hello, Kelly Rowland. How is everything going with the 'Ms Kelly' album?
Everything is going good. We live in a very different industry nowadays and it's a little harder to sell records, I'm noticing. But I'm not worried at all. Everything has been wonderful with this record so far. It's the type of album I wanted to make.

But you had to re-record it to keep the label happy…
I thought it was too mid-tempo. I wanted more dance songs on the album and I ended up getting that; I finally got my dance tracks.

Ironically, the slow ones are better.
I would love for 'Flashback' to be a single.

Are you glad you kept your mouth shut about dis­agree­ments with you label?
My label was really sup­port­ive. It wasn't them who wanted the album re-recorded, it was me. I felt like the album wasn't ready, it was all mid-tempos and ballads and for fans who had followed me since Destiny's Child, I would be cheating them if I didn't put at least one up-tempo track on there – I wanted to go back in and pump that out.

Which brings us to 'Work'. Is it about sex?
Oh no, it's actually very innocent. All I'm saying is don't come around if you're not going to live up to all your talk and as you know, some guys are just full of talk.

So all those lyrics about 'putting it in'…
Okay, it's a little aggress­ive maybe. It's just a woman saying you can't catch me easy and you have to put in the work. It's about putting in work – that's it, of course.

Were you pleased that the footage of you falling over on stage in Nigeria became 'YouTube gold'?
It was what it was, it was a medical condition, I just happened to collapse — I was dehyd­rated, if it's the joke of the day then those people are real sickos but I'm not worried about it.

Have you drunk any water today?
I'm drinking a lot of water. I have a huge bottle next to me right now.

Please don't fall over during this interview.
That won't happen.

Do you plan to continue with your cel­eb­rated acting career?
Hopefully. Different things are on the table and I'd like to land an acting role this year.

When was the last time you watched 'Freddy vs Jason'?
I haven't watched that in a while. One of my friends wanted to watch it on the weekend and I was like, 'NO!'. She'll probably bring it round and make me watch it anyway. So we'll see.

And what is Michelle doing at the moment?
She's in a play.

Are you going to see it?
Yes.

Good. What is the worst Destiny's Child song?
'Bugaboo'. It annoys me so much now, some of the stuff in that song makes me feel like I'm 17 years old, espe­cially the line 'So what? You bought a pair of shoes' – it's such a bad line to have to sing in concert. 'You bought a pair of shoes'? What terrible lyrics. At the time we were so into it but now – what on earth were we thinking?

What's your favourite Destiny's Child song?
'Say My Name'. It was so much fun to record and we crossed over with that song into a whole new world and it was amazing for us. Our audience got bigger.

Well, Kelly, thank you very much. What will you be doing for the rest of the day?
I'll just be chilling and watching The Food Network on TV. I'm obsessed with it when I have time off I like to watch it all day.

Have you picked up any good tips for dinner?
Oh no, I'll be going out for food. I'm not cooking.

Thank you very much Kelly Rowland.

Kelly Rowland's releasing a song about waiting for the nightbus