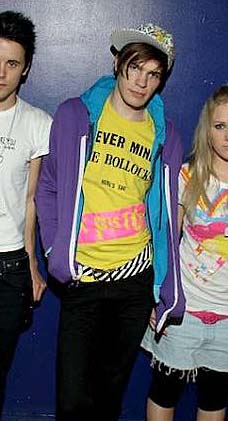 "I WOULDN'T WANT TO STAND NEXT TO SOMEONE SWEATING AND NAKED."

James from Hadouken! talks nudity, the Olympics and Thundercats…

As we have mentioned several times pre­vi­ously, Hadouken! are one of the most amazing new bands of 2007 and their new single 'Liquid Lives' is an shock­ingly brilliant follow-up to 'That Boy That Girl'.

As he was preparing to get into a van and go to Cardiff, we spoke to singer James Smith about this, that and the other…

Hello James. Drink, smoke, fuck or fight?
Can I have a shower? Is that an option?

No. Those options are taken directly the lyrics of the new single you are here to promote.
I know. The remix, funnily enough, will have the 'shower' option written in so I will take that. I will probably go naked for it as well – because sometimes it helps.

Can you just pick one please?
OK. What are the options again?

COME ON!
I'd ask for an eighty litre drink of water.

For fucks sake…
I'd get inside it and that would be close enough to having a shower. It would probably be what is tech­nic­ally known as a bath.

How excited are you about the Olympics?
I'm so very excited because of how very much I love sport.

We're not convinced.
No. I heard that the logo looks like a Nazi symbol drawn by a six-year-old.

Well, it looks like a Nazi symbol drawn by a six year old Hadouken! fan.
I might start spreading a rumour that I designed it myself, although it does seem a bit stupid if you think about how faddish the whole scene is, designing something five years in advance of the actual event based on new rave…

Do you think anyone other than Tessa Jowell is still going to believe in new rave come 2012?
It will probably develop in hyper time into New New New New New Rave by then, since the cyclic turnover of culture at the moment is so ridicu­lously fast.

What per­cent­age of your wardrobe is Day-Glo?
I would say about 3% but the garments you are referring to do stand out more than the others — perhaps something to do with the fact that they are fluorescent.

Will you be wearing Day-Glo in five years?
In five years I will hopefully have moved on. My main aim for Hadouken! is that when I look at photos in five years' time I cringe horribly and say I was only doing it because I was young. If you don't get to do that then you're not pushing boundaries.

What's the worst thing someone from your band could turn up to a show wearing in the name of boundary-pushing?
Nudity would be pretty bad. I wouldn't want to stand next to someone sweating and naked.

That can sometimes be quite pleasant. Are Hadouken! not a band who are com­fort­able with each other's bodies?
Not par­tic­u­larly — apart from me and Alice. We're obviously a couple and it does help the rela­tion­ship process if you can be happy together with your clothes off. Our rela­tion­ship might start suffering if this wasn't the case.

Sadly, there are rela­tion­ships where this is often the case.
I feel bad for those couples.

Who would be most likely to turn up to a gig naked?
Probably Pilau. He likes to get his torso out but it would all depend how drunk he got beforehand.

Do you think that anyone outside East London is ever going to buy one of your records?
Probably not. But we just tend to have quite a young audience who don't actually buy music anyway, they just download it illegally. I think that if we sell it to every single person in East London we'd be doing alright though.

Will all future members of Hadouken! be assessed on how good looking they are?
Not at all. It's all about the instru­ments they are playing. If you can play an instru­ment, you're not allowed in the band. It's worked for us so far.

So it's just a coin­cid­ence that there are literally no ugly people in your band?
Yes. Absolutely a coincidence.

Who is your favourite 'Street Fighter' character?
I really like Akuma. He's the dark lord of the hadouken. He's one for the geeks because he was a secret character in 'Street Fighter II'.

What did you think about the Kylie Minogue 'Street Fighter' movie?
That was atrocious. I was about nine years old when that came out and if you don't like a film when you're nine it must be pretty bad. I've never gone back to it.

How do you feel about there being a Thundercats movie?
Shut up! Are they really making one? That could be the best movie of all time, although I have already written a screen­play for that one. I wrote it at college but my teacher thought it was so shit I wasn't allowed to submit it as coursework.

Was it shit?
It was really shit but the storyline was great! The Thundercats leave their own earth and then it blows up and then they go to that other place and then Mumm-Ra lives there and he is a bit pissed off that they moved in on his home pad and that's about it. Great!

Thank you very much, James from Hadouken!

Notes on the Katharine McPhee single