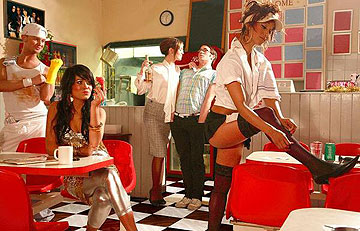 This is news which is not going to rock the found­a­tions of enter­tain­ment as we know it, but it's worth men­tion­ing: unsigned pop group Beyond have thrown in the towel. The inter­est­ing bit is that, unbe­liev­ably, they've done so just as a deal with a major label was on the table.

You may remember that about 18 months ago we covered Beyond's first London showcase. It was the first time we ever took a pho­to­graph of a chan­delier at a showcase — history in the making, really. After our rather vague praise for one of Beyond's cover versions a few days earlier, the night also featured the band ded­ic­at­ing their version of Cliff Richard's 'Just Don't Have The Heart' to Popjustice. A‑M-A-Z-I-N‑G.

In the time since then they've taken what was essen­tially quite a shambolic pro­pos­i­tion — Cliff covers were never really going to make sense in 2007 — and turned it around to such a degree that SonyBMG were offering a deal. At this point it appears one of the members decided that she wasn't keen on the whole thing after all, which in turn means that the band have decided to split up. It all seems a bit odd but now is not a time to question, it is a time to mourn and reflect. Beyond weren't perfect but everything was in full working order and it's frus­trat­ing that a pop group with a lot of potential, having finally been given an oppor­tun­ity to tap into a company (and pile of cash) capable of helping them realise that potential, will instead simply disappear off the face of the planet.