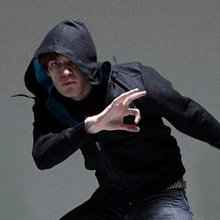 "I DON'T WANT DAD ROCKERS AT OUR GIGS…"

Hadouken!'s growth over the last 18 months has been one of the more inter­est­ing subplots in pop's post-mil­len­nial soap opera.

As the band have developed and matured — ie stopped wearing so much neon (see picture) — they've also signed a deal with a major label, becoming one of the British music industry's most high profile exper­i­ments in cross-platform mul­ti­me­dia 360-degree brand exploit­a­tion (or something). But while doing that they've also kept their original fans. And also written some pop songs.

Let's have a chat with James from Hadouken! to see how/why this has all happened.

So on the album 'Driving Nowhere' and 'Declaration Of War' are very song-based pop tunes. Is that something you wanted to do or was there an A&R man with a gun to your head?
(Laughs) Well the fact of the matter is that – without wanting to sound like a twat – as musicians there are song­writers inside us and I was behind those two songs, so they're just the sound of a song­writer trying to get out! It’s all well and good to have a song like 'The Bounce', where I’m pleased with those lyrics and there’s an energy to it, but if you wrote twelve 'The Bounce's on an album you’d be having to turn it off because you had a headache. I wanted to break the album up.

Are these songs a hint at what the band will be doing next?
It may be a nod to the future, it may end here. If we play the songs live and they don’t get a good reaction or we don’t enjoy playing them, that’ll be the end of those songs. I wouldn’t expect a second album full of those songs, either way. I think to the wider public it’s important we don’t always just release the radio friendly songs – for the next single we’ll probably go with something a bit more harsh like ‘Crank It Up’. The wider public do view you by your singles and if we were to go with the radio friendly tracks as singles in a row people would probably think we were closer to The Killers than a jump-up dance thing.

You seem to care a lot about what other people think.
Yeah, I know… But you want the right people coming to your gigs, don't you?

Who are the wrong people?
I don't want dad rockers at our gigs. That’s about it. And there are plenty of bands serving those people.

Hadouken! were signed as one of the first big '360' acts. Do you see your career as being an exper­i­ment by your label?
Yeah…

Is that exciting or scary?
Well, from the start we tried not to do things by the book. When all the labels were having us in for nice slap-up dinners we were asking them how they wanted to work with us and we were attracted to the ones who were saying, ‘well, the music industry’s changing, you’re a product of that so let’s push it further’. I mean they come up with ideas and we come up with ideas and as long as we can stamp our mark on something and say it’s great, or go ‘that’s ridicu­lous and won’t work’, we’re happy to do it.

'Aerials': this is Hadouken!'s thing where you pay for a year's sub­scrip­tion then you get free stuff in the post and online through­out the year.
Yeah…

So it's a fan club you’re not allowed to call a fan club, right?
I must admit I hate talking about it… In some ways it does stink of 'fan club'. But on the other hand there are people who’ll come to gigs but don’t want to buy an album. It’s trying to give them a product or something they can grasp and get hold of and feel part of.

On your website under­neath the nice big Hadouken! logo, the two biggest links are for ‘STORE’ and ‘AERIALS’. Why is that?
Erm… Because… Yeah, why is that? Erm, I’m going to check that one out.

As a member of Hadouken! the band rather than the brand, do you think it's weird that  there isn’t even a button for ‘MUSIC’? The closest thing is ‘MEDIA’.
No, but go down the page! There are six songs in the player! And yes you can buy shoelaces… But I mean you can go to Top Shop and buy shoelaces, but you can’t go to Top Shop and listen to that music. I under­stand how this system works at the moment and that someone has to put those little links in to make some profit, none of which I’ll ever see a penny from, but all I give a fuck about is writing those songs in the player and then per­form­ing them. There’s a point when you’ve been in your bedroom writing those songs then you upload them, then I guess there’s a point when it does become a bit of a monster…

Does it feel out of control?
Absolutely. Hadouken! is more than just us five members now whether you like it or not, and sometimes I don’t like it. But the way I coun­ter­bal­ance that is to con­cen­trate on the music and to make sure the music’s fucking strong.

Talk us through the amazing post-apo­ca­lyt­pic vision of your new 'Declaration Of War' video.
Well I was sold a sort of John Carpenter-esque idea, with a bit of the Arnold Schwazenegger film The Running Man, and it sounded quite cool and fucked up. As a band we've moved along quite fast and this wasn’t really about rein­vent­ing ourselves, but… Well, a lot of people think that we’re jokey new rave grindie kids from 2007…

…2007 being ‘back in the day’…
Yeah – exactly! It’s so sad… Anyway we wanted to do something that was com­pletely distanced from that. I’ve always admired bands like Radiohead and Prodigy who’ll reinvent them­selves from album to album and with the way things now move so fast I want to try and reinvent ourselves from track to track. Well, I think it’s more fun that way, anyway. Every time we’ve written a track it’s turned out different.

Revenue stream ahoy: you could do a new range of shoelaces for every single, rather than just every album.
Yes.

You and Klaxons are probably keeping the dodgy scifi pub­lish­ing industry afloat, aren’t you.
Well yeah… So we decided to call the album 'Music For An Accelerated Culture', and then someone pointed out that it sounded like Prodigy's 'Music For The Jilted Generation', but if it’s got a sim­il­ar­ity to a Prodigy album then I’m fine by that. There’s that mural in the artwork for their album of these ravers living in a nice placid world, and then SWAT teams and author­it­ies who are living in a horrible place… I thought that was cool.

Are you sure? It's such a twee sentiment and heavy­han­ded execution…
Well, I know, it’s pretty funny. Have you read Kill Your Friends? There’s a sequence in it about that. At the end of the day I don’t think we’re fucking revolu­tion­ary but we’re at least trying to be some sort of altern­at­ive to that fucking dad rock fra­tern­ity – trying to move away from that. Sometimes it doesn’t work but if you try and you’re at least attempt­ing to do something different, then little gems will come out of it.

Thank you very much, James from Hadouken!.

*
Hadouken! are on the Internet here.
Previous Article