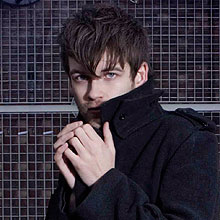 Fyfe Guillemot is in the mood for a fight…

Guillemots are amazing and that is all there is to it.

Here is a chat with the lead singer ('Fyfe' 'Dangerfield') about things of interest to the world.

Hello Fyfe. Would you eat a pie made out of human flesh?
I would. I love pies. I had a turnip and mutton pie recently.

Surely human flesh would be pref­ere­able to that vile con­coc­tion. Who would win in a fight between Sir David Frost and Matt Lucas?
Frost, def­in­itely. He’s got that look about him. He’s got the look of a man who has a lot of violence just waiting to come out.

£20,000 is an odd amount of money to win, isn’t it. It’s slightly more than being token­istic, yet for a band with five members it rep­res­ents little more than ‘a half decent second hand car’.
You can have a nice holiday. You could probably buy a really cheap flat somewhere like Hungary. House prices in London are ridicu­lous but you might be able to get somewhere in Hungary. Or Barcelona.

Have you got a beard at the moment?
I was going to shave it yesterday but then I didn’t, so yes. I don’t really see myself as having a beard to be honest, I mean when I do shave I look like an amoeba. I just don’t like it. Because a lot of the day I’ll be wearing glasses and they make me look really horrible. With a beard: dishevelled librarian. Without a beard: scary. Associations with beards are often not positive.

Are we talking about the fact that all pae­do­philes have beards?
Yes.

NOTE TO CHILDREN: ALL PAEDOPHILES DO NOT HAVE BEARDS.

Paul McCartney is appar­ently a fan of your band. Do you think Paul actually has par­tic­u­larly good taste in music?
Oh I don’t know. He phoned me up the once and… Hang on, this isn’t exclusive because I’ve told someone else.

Don't bother then. Have you got anything exclusive you can tell us?
Here’s an exclusive for you: I now like Klaxons. Whereas I didn’t think I did before. I always do this thing where bands come out, I decide they’re shit, then I realise they’re not shit at all and that I actually quite like them. I always see Jamie from the band at gigs, but when we walk past each other he doesn’t give me ‘the nod’ so I presume he thinks we are shit. Either that or he has literally no idea who I am.

Why don’t you say hello to him?
Because he is more famous than me so he should say hello. That’s how it works. Anyway, there’s your exclusive. Am I not inter­est­ing enough for you?

Have you got something we can take com­pletely out of context?
How about ‘Beyonce likes mutton’. You wouldn’t expect Beyonce to like mutton – you’d think ‘oh, if Beyonce was to eat mutton that would be com­pletely unex­pec­ted’. So for you to be able to quote me stating that she does indeed eat mutton would be a great exclusive. A great headline or something for you. You’re not feeling this, are you. I’m sorry. I’m quite long winded.

Have you really always found the Rice Krispies dictum ‘snap, crackle, pop’ very pleasing to the ear?
Yes I have, I wonder where you found that out? Yes, def­in­itely. It has a real zing to it.

We weren’t quite sure whether those points had been made up and emailed in by a sinister PR svengali rather than a genuine member of the band.
No, it was me. It’s got a real zing to it, hasn’t it? I wrote those answers for you one morning, while I was in bed. I was actually wanking while I wrote your answers.

Are you wanking now?
Yep. Does that change things?

No. How much longer is this interview going to go on for?
That’s up to you.

The question really is whether it’s likely to get any better or whether we should all just cut our losses now.
Ask another question and let’s see what happens.

If this album is a total disaster and you need to seek employ­ment elsewhere, do you think your name – Fyfe Dangerfield – would be of benefit in the world of espionage?
I think so but I’d probably go for magician.

The worlds of magician and spy are not mutually exclusive, though. In fact each provides a brilliant cover for the other.
Spies have more cred­ib­il­ity than magicians, I suppose. I mean if you think James Bond, and you think Paul Daniels, Bond would probably win.

Also, the problem with the ‘spygician’ route is that anybody attempt­ing to combine both jobs would probably end up being David Blaine.
Nobody would want that. I like the idea of being an under­taker. Maybe Popjustice could rename itself Fyfe Dangerfield. Everyone thinks my name is made up. It’s not. Well it sort of is because Dangerfield is one of my middle names but it’s my mum’s maiden name and as the singer in a band it’s my prerog­at­ive to use it as a surname if I so wish.

Was your mum a spy?
Yes, she worked for the KGB. Journalism, all this asking of questions, is sort of like approved spying, isn’t it?

Surely if spying is approved, it’s not really spying. It’s like saying that present-giving is ‘approved theft’.
Yes.

Would you ever pay for sex, Fyfe?
Well I pay my girl­friend every time. It seems like the decent thing to do. I don’t pay her much, fifty quid plus expenses for good per­form­ance, that kind of thing. It’s good to incentivise.

Your girl­friend works for an architect. Does she bring home free buildings like the rest of us bring home Post-It notes?
No. Well I don’t know. I haven’t asked. I’m guessing it’s not going to happen. She’s not a person capable of moderate response – everyone's either a cunt or she loves them. She should have her own fly on the wall TV show.

Are we going to have to talk about music at some point?
I suppose we probably should do.

Shall we do some shit music questions?
Yes! The one we get asked a lot is ‘was it a conscious decision to make all the songs different on the record’. I don’t under­stand that. It seems to be frowned upon if your songs don’t all sound the same. Anyway. Ask me a question.  Ask me shit questions and I’ll give you shit answers.

Amazing. Okay: So! You’ve got a new single coming out. How does that feel?
It’s really exciting to have a record out there. Ultimately it’s all about the music.

You’re playing live soon, are you looking forward to that?
It’s really sat­is­fy­ing to play a gig because there are people there in the audience.

You have lots of fans, what are they like?
Yeah I mean at the end of the day if someone likes our music we respect them, your fans really make you who you are.

What’s your new single about?
It’s kind of like people can take it as being whatever they want it to be about, kind of thing.

How did the band get together?
(Guffaws) We did actually start making up our answers to that question – we spent a long time pre­tend­ing that I’d met Greg in a bakery and got talking to him because he was getting into a fight about croissants.

*
Guillemots are on the internet here and here
Previous Article