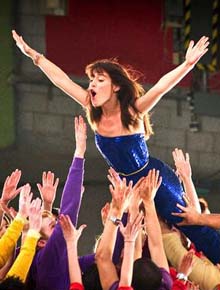 Feist may not seem like your typical Popjustice inter­viewee. She plays the guitar and is, by and large, quite acoustic.

However, there is no denying that '1234' — coin­cid­e­natlly 1,234 being pretty much the chart position it achieved when it was out the other week — is amazing and because of that, we decided a quick hello and a bit of a chat would be in order…

Hello Feist, been up to anything nice recently?
I saw a unicorn, he was just galloping on past.

No you did not.
Unicorns are like ghosts, they flicker past. If you look at them you won't see them. They're there but if you really try to look at them they disappear.

Were you angry nobody bought your single?
I don't mind it because I didn't even know it was for sale. As long as people are watching the video on YouTube and not the one on TV then I'm happy. You can hear the dancers shrieking, clapping and yelling and it is just so much more joyful.

How did you prepare for that all singing, all dancing extravaganza?
Well, when I was 13 I was in the opening ceremony of the Olympics in Calgory as one of a thousand children who rehearsed for two years to create this crazy show that was created for an aerial camera. It seems insane to spend so long just prac­ti­cing to be a bit of a skier.

Which part of the skier were you?
I don't know. All I could see was loads of other kids. I just moved where I was told to move.

Do you appre­ci­ate people coming along and remixing your little songs into enormous noisy electro things?
I don't really like it when someone takes the rhythm we've worked hard on and replaces it with a dance beat.

That would be the essence of a remix, Feist.
True. Most of the remixes which have been released are the ones which have created something new from the DNA of what was already there. It's like the songs get to go to a mas­quer­ade ball. They get to play dress up too.

Do you think popstars should stop trying to save the world and get on with their jobs?
Well it's easy to question what impact the Pussycat Dolls will have had per­form­ing at Live Earth, but what's most important is that Pussycat Dolls remember to turn their own lights off. London was flooded recently, do you think that is normal? It's unbe­liev­able that people are still finding excuses not to believe something needs to be done.

Do you remember to turn off your lightbulbs?
Of course. Also, for every album man­u­fac­tured we give a child in China, Bangladesh and Canada a seedling at the beginning of the year which they grow into a little plant, which is then planted and through the year they see their tree grow. It seems bizarre to use inform­a­tion about con­serving trees that is printed on paper – the irony being that they would say 'you can make anything from a tree – even this book'. That's helping no one.

Hmmm… Anything else?
I take a Thermos on tour and don't drink bottled water.

Is that it?
I'm putting a solar panel on my house and I'm looking into geo­thermal heating.

Well every little counts. When you are driving around the world in your big petrol guzzling tourbus, how do you stop the tedium of traffic jams?
I just get out and walk. I did that recently. It was only a mile to travel and would have taken us hours to get where we were going and it took me five minutes to walk it, ho ho ho.

Thank you very much Feist.

Rihanna's rain comes to an end