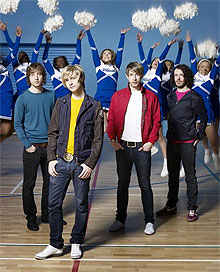 Aaron Delays 'lifts the lid' on his fascinating life…

Here's an interview with a man whose job it is to be in the band.

Hello Aaron! Do you have any amazing mer­chand­ise on your current tour?
We have brilliant magical mugs which, when you put hot water in them, have 'LOVE MADE VISIBLE' come up.

The word 'LOVE' or the words 'LOVE MADE VISIBLE'?
The whole phrase.

Surely you only need the word 'LOVE' to come up for this mug concept to work?
I know that. You know that. But try telling people. Not everyone thinks on the same higher plane as us.

Well, you've made a big mistake.
We've sold loads of them.

When you are driving along a road and you see a sign saying 'DELAYS
EXPECTED', do you have a little chuckle to yourself or has the novelty worn off now?
Oh, it's funny every time.

The signs are good on the way to music festivals, par­tic­u­larly the V festival.
I know. We actually got into a fight on the way to V last year. I acci­dent­ally – ACCIDENTALLY – smashed a load of bottles in a shop, and there were five guys who appeared with what can only be described as baseball bats. I picked up a Ginsters and we had a fight.

As you stood there, smashed glass on the floor, Ginsters pasty in one hand with five men about to attack you with baseball bats, did you think to yourself, 'do you know what – I'm really living the dream'?
Yes. I thought 'this is really where I want to be'. It was probably the greatest moment of my life. Or was it? Oh, there's a plane going past the window… I wish I was on it. (Pause) Someone told me yesterday that their favourite size of paper was A5.

A5 is a good size.
How can you have a favourite size of paper? It's like saying what your favourite type of cress is.

What's your favourite type of cress?
Watercress. How many types are there? (Pause) I'm not very good in the mornings, sorry — I mean I'm talking quite a lot but let's be honest, it's all fucking bullshit. Sorry, I struggle to think properly when I've just woken up. Which means I just come across like a fucking idiot. Maybe I AM a fucking idiot, it keeps happening.

Maybe if it happens a lot you need to ask yourself some difficult questions.
Oh, I have. And I've come to no conclusion.

Thing is, if you're in a band, it's sort of your job to be an idiot. It's what people expect.
You're right. It's a tricky situation with inter­views. Because really, who gives a fuck about my opinion? I am just the singer in a band. Do you know what I mean? I can hate stuff privately, for example, and the problem with saying you don't like something is that you end up looking like a fucking arsehole because everyone else pretends they like everything! There are a few bands I hate. There are some good songs out there but let's be honest there are some songs out there which everyone knows are fucking shit.

It's just as well you like their music so much. Considering you'll probably bump into them a few times this summer.
I'll fight them! We could fight them at festivals! Delays versus Scouting For Girls! Do want that?

You could, as someone once said, 'fight them on the T4 On The Beaches'.
We could fight Foals as well.

Thing is, Foals are a happy go lucky bunch and they take criticism quite well. It would be like water off a ducks' back. If people say something nasty they'll just say 'fair enough — we appre­ci­ate your viewpoint'.
I could have an intel­lec­tual debate with them. And then when it could get nasty just say 'no, mate, that's not what I mean'. Then have a fight but very subtly. Passive, then aggress­ive. But mainly passive.

Your last album was amazing and no fucker bought it. What will change with your new album? Basically, what's the point?
The point… Erm…

Did they tell you that or did you figure it out?
Well when we went into the office and there was NO poster of us anywhere, that was a hint.

Did they think they'd signed a different band?
I think they tried to fit a fantastic triangle into a round hole. I sub­sti­tuted square peg there, did you notice? I was trying to put my own spin on a popular phrase. Sorry, I do that quite a lot. I take things I've already read and then dilute them to make them sound far less inter­est­ing. Anyway, when we first signed we signed to Warner Brothers with Geoff Travis, and then something happened there and I'm not a busi­ness­man – much as I claim to be to my friends – and then Geoff signed us to Rough Trade, much to the dismay of the Rough Traders. Then we left. It was mutual. It was a nice 'we left'. I could tell you a lot more off record and it would be a lot more interesting.

Go on then.
Er… No. Some things happened. It's not horrible. But… It's stuff people don't need to know. But it's stuff that if people want to they can create in their heads as the most unbe­liev­able thing ever.

Is it a dream come true to have a video with some cheer­lead­ers in it?
As soon as we saw the words 'cheer' and 'leader' in the treatment we were sold on it. When we sent the song out to video directors we delib­er­ately didn't include the meaning of the song – it's about OCD – to see what we'd get back. The song's kind of a funny look at OCD… Although I don't see Greg laughing about it when he's picking up litter that I've strewn down his street at 3 in the mornig just to make myself laugh.

Do you do that?
I have done that, yes. But don't get me wrong, I know how draining an inflic­tion like that can be.

What other hilarious tricks can you play on people with OCD?
You could put honey on their doorhandles. (Pause) I've never done that, I just thought about that then. I don't know why that would be funny at all, really — I like honey. And doorhandles. You could spill, I dunno, bags of… Er… Cereal. Or you could spill a bag of pills, or coc… (Gives up) Oh I don't know.

Can we talk about tooth­brushes instead?
Sorry, we're talking about me and we shouldn't be.

Let's talk about Toothtunes. Press a button on the tooth­brush, it plays a song by VIBRATING IT THROUGH YOUR HEAD.
I love the concept.

It's like being in the future.
IT IS! I like the future, actually – I'm planning on spending a lot of time there.

Was that supposed to be a joke?
NO! I can't do funny. Ever. Now that tooth­brush sounds fucking horrible. But I want one.

You can vibrate it into people's heads as well if you hold it onto their skull. Could Delays get inside a toothbrush?
Physically?

Why is there no 'the' in Delays?
Well there wasn't ori­gin­ally but it's difficult to say in a sentence. Just saying Delays in a sentence is difficult. For some reason. Our brains are pre­con­di­tioned to say 'the'. It was a conscious decision not to have a 'the', though. We nearly gave in but we knew we needed to take a stand. We're rep­res­en­ted the 'no the' bands. Don't even get me started on bands with 'thee'. What's that all about? Maybe we could do that.

Thank you very much, Aaron from Delays.