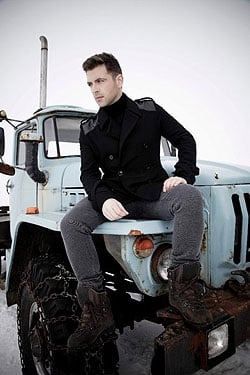 How are you?
I am good thank you.

Exciting. What's been happening apart from your band — the only band I ever really loved — splitting up?
Erm, well this week we've been doing loads of promo but it actually hasn't been crazy busy. Apart from that we've just been sitting around…

Is it a bit like when you know you're leaving a job and you're working your notice period so you're not really working as hard?
Well there have been moments like that, I have to admit. Let's just say we didn't take Lorraine Kelly as seriously as we might usually have done.

Perhaps in your final moments as a band you'll exper­i­ence the carefree abandon you missed during your living years. Maybe it will all make sense far too late, a bit­ter­sweet glimpse of what might have been.
Well there's def­in­itely a feeling that a weight has been lifted, in a sense, and I think that there have been many moments through­out our career that would have been more enjoyed if it was that way. There was a pressure that we put on ourselves and maybe it was a pressure that we should have tried to hide a bit more. With the business side of things and the boring side of things it's important to be driven, but maybe that came through a bit much in the music. But since we announced the split and it's been done, I've felt that it was a bit like coming out — now it's over, you feel a big weight off your shoulders and you can begin to enjoy yourself.

Blimey. So are you relieved it's over?
I think everybody's relieved that we've got to where we are and it's all amicable. Nobody really knew exactly what was going to happen and that created this tension. Nobody quite knew how it was going to unfold, and how we were going to manage the end of the band. But all that's gone now because we've done it, and we got there. When we were away in China and South Africa on tour and even before that we were worried about saying we were splitting up and nobody giving a fucking shit! But we've just found out that our tour is — bar none — going to be our biggest tour we've ever done. So thank­fully people, well our fans, give a shit. It is bit­ter­sweet because the reaction has been fantastic but we still have to face the unknown which is scary. You're walking into the darkness. We've got no idea what's facing us. Ultimately people are going to look at whatever we do as either complete flops or massive successes — nobody cares or everybody cares. You just have to be positive with yourself and try to do something good, but of course you also hope that whatever you do is going to justify itself with a bit of success, you know what I mean? Nobody sets out to make an amazing album nobody listens to. Nobody sets out to make a flop.

Speaking of flops — what about the single? What did Barlow do? Take That torpedoed Westlife at the last minute!
Ah — well, the song that I'd written, 'Beautiful World'…

…which is the best of the new ones on your Greatest Hits…
Great. Well that was the one that when Nick Gatfield our A&R man came to see us in the studio, that was the one we played him because 'Lighthouse' wasn't even in the picture at this stage. And 'Beautiful World' was the one Nick Gatfield was like, "this is a smash, it's amazing". And he had months to live with it and at the last minute 'Lighthouse' came in, and it was written by Gary Barlow, and, you know, people were very quick to assume that whatever he writes is going to be massive…

Did you think the song was any good though?
I think that as a band we have to be a unit and we have to stand by our decisions and we all went and made the video and we released it and…

Mark you seem to be talking yourself away from the question slightly.
Look, when I talk to my friends and stuff, I think… Well, on paper, it's a ste­reo­typ­ical Westlife song, but to me there's something about it which is also unlike anything we've ever recorded before…

It's got a rubbish tune?
(Laughs) Now you said that, not me… But anyway we have to stand by every song we release. It's def­in­itely not our best song ever, and it's def­in­itely by far — by a million miles — our worst chart position ever. But the album's been doing well. But as I say, a lot of people were charmed by the idea of the song. I mean we all have to stand by our decisions. It's been our least suc­cess­ful song ever. There you go. Anyway we're doing a video for 'Beautiful World' and that's tech­nic­ally our last ever song, so…

When you say it's 'tech­nic­ally' your last ever song, are there more to come? I'm a bit worried about this whole split thing being a long goodbye that never really ends.
No it's not that, don't worry. 'Beautiful World' isn't tech­nic­ally going to be a single, but it'll be serviced to radio and there'll be a video so it'll be a bit like 'When You're Looking Like That' where it was never released but it was still promoted.

Thanks for bringing that up Mark because despite being your best song 'When You're Looking Like That' seems not to be on the standard edition of your Greatest Hits.
I know. We were doing some signings the other day and they were playing the deluxe version of the album, which does have it on. 'What Makes A Man' is on that second CD as well. It was difficult, we wanted there to be a balance. I mean to be honest we kind of left it to the label. They went off and did all this research and I don't know whether to listen to a second of it…

What did the research say?
Some of it was more obvious — 'Flying Without Wings' was people's favourite song or whatever — and there's other bits I can't even remember. We went in one day to sit down and listen to the results of the research. They went through ten or fifteen pages' worth of research on a big projector — then left about about two hours' worth of stuff I think they didn't want us to know about — but the whole point of it was to show us what songs should go on the Greatest Hits.

What do you think they didn't want you to know?
I would love to know that.

It would be useful for you to know now you're doing your solo stuff.
Definitely. Maybe it's a bad habit but when I write songs these days I tend to think of who I'm writing for. That's something that I got into because of Westlife — you've got to think to yourself, 'what's the best Westlife song I could write?'. And…

Well, 'When You're Looking Like That'.
Well yes but when I'm doing my solo stuff I think I need to get away from that a bit. I think it needs to be believ­able and real or there will be no point. It's exciting for me because I have no idea how good or bad it will be. I'm excited about the idea of having no rules — if it's a shit song, it's MY shit song.

What was that stuff you were saying the other week about everyone in the charts being boring? And then the interview came out and everyone went 'oh fuck off Westlife you can't talk about people being boring'?
Did I say that?

It was about people in the charts not being original enough, or something.
Sometimes we might do an interview and we might give an answer and people turn it into one big blunt fucking… You know what I mean? The thing is though, just because I'm in Westlife it doesn't mean I can't have my own opinion of music, and the music I'm into isn't always relevant to the fact I'm in Westlife…

So are you saying as well as being in Westlife, you are also a fan of music?
(Pause) Yes. (Laughs) I like the way you twisted my words. I also like Westlife music!

You like Ed Sheeran quite a lot don't you?
There are a lot of exciting artists out there but Ed Sheeran's album in par­tic­u­lar is very fresh for me. When it's next to everything else that's out there I find it really fresh. But you don't like it do you? Don't you call it The New Boring?

In the sense that Westlife are sort of The Old Boring, and Sheeran rep­res­ents boredom for the next generation.
We were years ahead of the market!

But the inter­est­ing thing about Ed Sheeran boring, Adele boring, Birdy boring, and that sort of boring, is that it's credible boring. Whereas Westlife weren't ever really very cool. It's like The Great British Bake Off — five years ago, if you were in your twenties and said that baking was a hobby you might be seen as being a bit eccentric or whatever. But now it's cool.
Maybe it's something to do with the economy? A few years ago it was all 'oh let's fucking fly to the moon' and maybe all people really want now is a log fire and a freshly baked cake.

Can you bake?
If it's in a readymade packet, I can. I can follow dir­ec­tions pretty well.

Sometimes being able to follow dir­ec­tions is all you need in life. Tell me where I need to be, tell me when, I'll see you later.
Not everything in life comes with instruc­tions, unfortunately.

If only life were more like a shake and bake pancake mix.
I know. I can get through one of those and a jar of Nutella in half an hour!

Diet tip: when you're preparing for your solo tour, lay off the Nutella.
I know. When I'm more in control of my life I naturally become fitter as a person. As you may have seen on the year off. I don't know if you were paying attention.

Will your solo stuff be all kind of 'ooh everyone fuck off I used to be in a band and now I'm not' or will there be more to it than that?
I'm not sure. Coming out of fourteen years with Westlife there was a very specific formula and I could go off and exper­i­ment for a year and still only scratch the surface. More than anyone else in the band, I think, I need to exper­i­ment. It's scary. Music is such a massive spectrum. It's daunting! But it's exciting.

What does make a man?
A cock and balls.

Westlife's hits col­lec­tion is out now (here it is on iTunes).