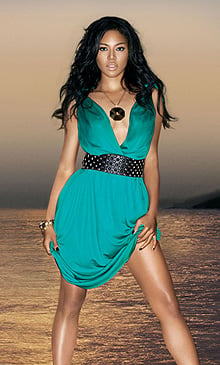 When Amerie released '1 Thing' a few years ago she shot herself right in the foot because there was obviously nothing else amazing on her 'Touch' album. So she cleared off for a bit, had a think and is now back with an amazing new album full of hit singles. So well done her.

We spoke to Amerie recently, although sadly before we had heard her amazing 'Gotta Work' track. This a shame but things like that can't really be helped…

Hello Amerie. Where are you right now?
Right now I'm in LA.

Are you near a window?
Why? Are you outside?

Yes. Can you describe, for the benefit of the Popjustice read­er­ship, the view from your LA window?
Well all I can see is the really big highway right outside…

But where are the 'beautiful people'? The 'beach'? The 'Paris Hilton'?
I can see a few palm trees but it's mostly traffic, really. I can see the Hollywood hills, which is pretty nice.

Well we are not actually outside your window — we are in London and all we can see is a building site. Your favourite TV show is 'South Park'.
Yes.

We know you know that but we were intro­du­cing the next question for people reading this.
Okay…

Would you like to be a South Park character, Amerie?
Totally! But when they do celebrit­ies you're lucky if you get to play a person, most of the times you'll end up playing a dog and all you'll get to do is just bark for a whole episode. I think Matt and Trey — the writers — are really smart! Some people just look at 'South Park' and say 'oh it's just this cartoon kinda thing' but what is so funny about the show is that whatever the hot topic is, whether it's stem cell research or celebrity obsessed culture, whatever it is, they always put it into their cartoon.

Would you be happy to bark?
Yeah, I'll be the teapot, I don't care. I love it.

South Park is a bit A Few Years Ago though. Isn't everyone watching Heroes now?
No, I heard it is a really big show right now, but when it comes to tele­vi­sion I'm so impatient that I just wait and buy the DVDs. I will not wait a week to see the next episode of a TV show. I want to watch them all in one go. I remember when we used to have the internet years ago and you'd sit there waiting for literally 30 seconds for a page to load. ("That sounds like the new-look Popjustice" — The World) These days if it takes more than two seconds you start shaking and screaming 'what's going on?!'

It is a bit like living in the future, isn't it?
Yeah.

Which award shows are best for free stuff, Amerie?
One time I went to this award show and I was meant to get this hot chocolate maker but it never came! I was so dis­ap­poin­ted. They promised they had sent it. (Fumes quietly for a moment) But I'm not one of these people who just turn up to shows for the free stuff. Sometimes I skip the goodie-bag rooms com­pletely because I always feel bad getting stuff for free. On the other hand it hurts people's feelings if you avoid them.

Rooms? DIFFERENT TABLES?!? Do they just give you an empty bag and send you off around the place?
There are bags at every table and you pretty much just help yourself. Some people run in, go around the tables and then they are gone. But you don't go round to someone's house, eat dinner and then run out, do you?

Shall we talk about music now?
Yes. Let's.

We are asking you for your opinion, however.
(Laughs) I'm putting out my best work and I wouldn't put out anything I didn't feel isn't up to scratch.

Well, how many hits are on the album, then?
I can't say 'that’s a hit, that's a hit and that's a hit'. But I would probably say that this album has the most com­mer­cial songs on it and there are lots of potential singles on the album.

Are there any 'surprise' duets or cover versions on the album?
No, but I'd like to do something with The Killers. I'll sit in my car singing their songs thinking how great it would if that was my genre and I could sound like The Killers. Whenever I sing their songs I am always making it a duet with me…

While you were saying that we were examining our Gwen Stefani doll. If…
THERE'S A GWEN STEFANI DOLL?!!1!!!11!

Yes, and it is very good. Anyway, if there was an Amerie doll, which accessor­ies would she come with?
None. She'd just be naked.

If she could talk, what would she say?
She would say 'Sa rang hagi de muneh' – which is Korean for 'Because I Love It', the name of my new album…

Would she say anything else?
No.

So she would literally say 1 thing?
Yes!

That's enough of that! Thank you very much Amerie.