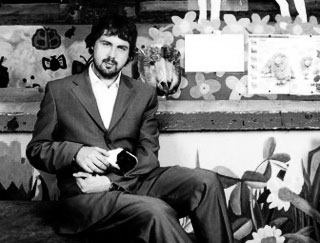 May 2012 was a month in which various things happened in ‘the world at large’. But how did these things impact Richard 'Producer Of Note' X? Let’s ask him.

In Turkey a bird was found dead in a field with a silver ring on its leg stamped 'Israel', causing suspicion that it was in fact a spy.

If you were going to spy on another country, which animal would you use to infilt­rate the border?
I really didn't think I'd be signing up for this. I didn't receive a contract in time to check the small print. Can you repeat the question.

Bird in Turkey blah blah, which animal would you use to infilt­rate a border?
I would imagine a sheep would be the most obvious. I think they're universal. They're well-respected in every country. Do they have a religious sig­ni­fic­ance? Either a sheep or a goat. What is my sheep expected to do when it gets there?

Perhaps wander around with a camera or recording device on its back, or something.
Oh I see. I'll just say sheep and we'll leave it at that.

The brilliantly-named Phillip Phillips won American Idol in May, after 132m — ONE HUNDRED AND THIRTY TWO MILLION — people voted.

Have you ever voted for a con­test­ant on a TV reality show?
Do you know what? I think I might have been asleep for most of May.

But in general, have you ever voted?
I think I voted for someone possibly eight years ago, but I don't know who it was and I don't remember what show it was. I certainly wouldn't at this stage want to be seen to be endorsing anyone whose career had crashed and burned.

Did you watch any of The X Factor this year?
I saw bits of it. I think I wasn't alone in feeling not par­tic­u­larly involved in any of the con­test­ants' journeys. We won't even talk about the music. It makes the Diana Vickers year look like a vintage year. I know the talent pool has sup­posedly been running dry and I know a couple of people who were signed or who are signed or who had man­age­ment who were approached this year, but I think they were quite open about doing that.

Also in May, three ladies were chucked out of a tearoom in County Durham for not standing during the National Anthem.

When was the last time you were thrown out of somewhere for misbehaving?
I was once thrown out of the Ministry Of Sound. I can't tell you what I was doing but it wasn't legal. Before you ask, not in a Jimmy Savile kind of way, it wasn't anything like that. You may say I'm explain­ing myself too much now. Anyway, I was thrown out of the Ministry Of Sound and I did go for a meeting with them about a year ago and reminded them of that, not that I could hold any of their staff per­son­ally respons­ible. I'm generally at the stage now where I throw myself out of places. I've reached that level.

Boris Johnson was re-elected Mayor of London in May.

Is he a hapless buffoon doing more harm than good, or a refresh­ingly honest politi­cian with a beautiful fringe?
That zip wire incident really summed up the whole of Boris' career for me. I'm not a fan, but I don't want to get into politics because I think pop and politics don't mix and that was in fact estab­lished decades ago.

We're all still waiting for Jessie J's song about the riots of course.
Was that threatened?

Yes.
I can only think she's taking her time over it, like Leonard Cohen did with 'Hallelujah', so that it's exactly spot on.

Do you think we have too many days off in the UK?
Of course not! What's wrong with you? I think we had a great run this year, so God bless the Royals, if only in that capacity. That and the Olympics. You can't help but be caught up in it. Everybody loves a day off.

Pop doesn't stop though, surely?
Pop never stops. I think it was two Christmases ago I was editing down a demo and sending it to a manager on Christmas day morning because he said that it might be a good idea to give a freebie to Artist X's fans. Can you believe that?

Pioneering hairdresser Vidal Sassoon passed away in May, which is sad of course.

What’s been your worst hair disaster?
It's ongoing. I've always had problems with my hair. I've often had excessive wings which often spring up during a pho­toshoot — in the days when I did have pho­toshoots — but it hasn't really changed since I think I was about seven.

Would you ever con­trib­ute a song for a UK entrant?
I was approached two years ago actually. There was a year where they decided to talk to Neil Tennant, and Brian Higgins, and they talked to me and some others and their pitch was 'this year it's going to be different and we'd like people who have maybe done something a little more leftfield'. We had the dis­cus­sion about it being a poisoned chalice and stuff like that and the next thing I knew Josh Dubovie was our entry. Every country would love to have a great, classic song as their entry but I think it's more run as a TV show than a music show.

Sweden take it very seriously of course.
I don't know what happened to Eurovision in this country. It's viewed as joke. There's a lot of great song­writers here, but it generally looks so naff and it's seen as a career ending thing.

It was announced in May that the Asbo is to be scrapped in favour of the CPI, or crime prevention injunction.

If you had to to give someone an Asbo, who would it be and why?
I'd say Olly Murs, only because he seems to be this person in front of my face all the time. I believe he's a very nice guy and I'm sure I'd like him. Let's not say Olly Murs.

Tulisa?
I quite like Tulisa. I've been par­tic­u­larly enjoying the 'Intro' to her album. I was talking to somebody the other day and one of my favourite things is on Spotify I've got saved all the com­ment­ar­ies of people's albums. I've got Tulisa and my other favour­ites are Nicola Roberts' and David Guetta's because on Spotify they also remove the tracks in-between so you can just basically to a monologue or a rant. I think it's only a matter of time before we don't bother making the music to go with it. We might as well just talk about our inten­tions. Every A&R meeting starts with the hypo­thet­ic­als of an imaginary scenario. That's the concept for my next album — just 100% pop commentary.

Amazing.
Have I managed to avoid the ASBO question?

Well thanks Richard for that fas­cin­at­ing insight into your thoughts on the month of May 2012. We hope you had a sat­is­fact­ory year and wish you all the very best for 2013. 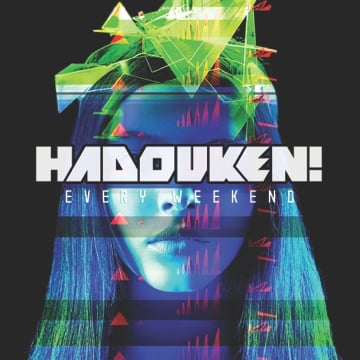 Relax everyone, Hadouken!'s new album will be released on February 18

The month of June 2012, with Jessie Ware