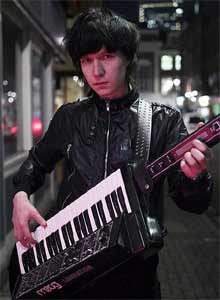 Brett Anderson has a solo album out. This in itself is not neces­sar­ily cause to hang out the flags but it has been produced by Fred Ball, the man behind quite brilliant Norwegian elec­tro­pop 'outfit' Pleasure.

Feel free to roll out the bunting for this, however, it's a Popjustice interview with Pleasure…

Hello Fred, what is Pleasure?
Pleasure is a project I started four years ago when I did my first album. I was good at writing and producing songs but I wasn't really a par­tic­u­larly good singer. I was actually a terrible singer. So I just thought I'd try to involve other singers and get them to do it instead.

Such as Justine from Elastica, whom you persuaded to claw her way out of retire­ment…
Yes. She came up to my flat. She'd be standing in my bedroom shouting — singing — while the guy next door was yelling at us to keep the noise down.

These are the dif­fi­culties of recording an album in a res­id­en­tial area, but now you have a second album.
Yes, and I've been working on other people's albums.

Such as?
I've done two albums with Bertine Zetlitz and I've done a solo album with Brett Anderson.

Why didn't you let Brett Anderson have your single 'Back To You' on his album?
We had a bit of a fight over that track. He wanted it for his album even though we'd written it for mine and then he was like, "fuck, it's so good, I've got to have it". I said no.

Why wouldn't you share?
Because we wrote it for my record! That was how we got together in the first place — I asked him if he wanted to do a track with me, we got together and we just had a good musical chemistry together. The plan was to do one track but we sat there for four or five months together and just wrote a whole album.

What is your obsession with using ex-members of Suede?
I didn't have a mas­ter­plan of using loads of famous singers, but as I write a song I think about what kind of voice would suit the songs, and what sort of attitude would suit the track.

Why do you like in the UK when it is one of the only countries in Europe where you don't have a record deal?
Because I like living here!

And how is Bertine Zetlitz?
Good. She's just had a child. I'm going to meet it in Norway next week.

Is Bertine as big in Norway as she seems to be from the outside?
Yes! She's the biggest female artist in the country! She's huge.

Then why does no one give a shit over here?
Well, once in a blue moon you'll have a band like A‑Ha or Ace Of Base who will do well…

Those blue moons were ten and twenty years ago though.
It has been a while, yes. I guess there are more altern­at­ive bands doing well now, like Royksopp and Mew.

Is the perceived Eurovision Factor the barrier for decent Norwegian — and European — pop breaking through in the UK?
I think people are scared of European pop in England. Everything is imme­di­ately put in that bracket. It's similar in Norway but I think there is a lot of pop in Scandinavia in general which maybe sounds a bit too poppy for some people and seems too extreme. Then again, some of the pop music from the continent really is dreadful…

Like some British pop.
It is hard. English pop music has tra­di­tion­ally been so far ahead of European pop music in so many ways — his­tor­ic­ally, like in the 60s and the 70s. And I think maybe people in the UK are just too used to that idea — too com­pla­cent about their country being the centre for pop music.

Would you work on their next album if they asked?
Yes! I'd get them all drunk, shove them in a room and turn the micro­phones on.

That is probably very similar to the current process.
With a couple of tweaks here and there, maybe.

If you had to choose between producing another indie album or Girls Aloud, what would you choose?
Probably Girls Aloud. I'm not a huge Girls Aloud fan to be honest, I find them a bit annoying. I'm sick of their faces now. They are sweet girls I guess, but their egos are growing though and sooner or later it's just going to split in two. If I was going to pick one to do a solo record with I'd pick the redhead because I think I could do a really angry track with her. I know she's got it in her.

In other news, is it safe to put a four-year-old on a pair of shoes with wheels on?
Well, I've got a pregnant girl­friend so that is a very relevant concern. I have to think about this sort of thing very seriously. My parents were really strict with things like skate­board­ing, they insisted on me wearing pads and a helmet — the whole lot — and I told them to forget it. It was just so not cool. So I'm not sure about Heelies.

Are you going to go a bit easier on your imminent child?
Probably not — so he or she probably won't skate either.

Pleasure On The Internet: