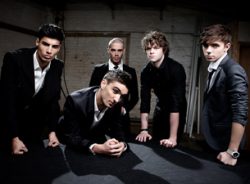 With the unfor­tu­nate calendar clash of unfore­seen US success and a frankly incon­veni­ent UK arena tour, The Wanted plan to get back to cap­it­al­ise on their American break­through as soon as possible according to Billboard.

The Wanted will also release their debut US album on April 24.

Rebecca Ferguson wants to work with a certain French DJ

A Newsdump for 6 March 2012: From Brandy & Monica's vid together to Rebecca Fergo thinking of Guetta