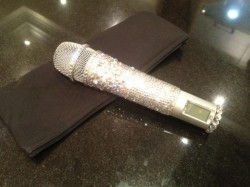 The Spice Girls are reportedly rehears­ing for the Olympics closing ceremony.

Well, according to Sunday Mirror columnist Dean 'Pipo' Piper they are.

Dean Piper chose to tweet about this very thing earlier today, saying: "So the Spice Girls are all together rehears­ing for the Olympics RIGHT NOW in London. #itson­bitches."

It's all pretty encour­aging stuff really, but nothing has been offi­cially confirmed.

Tracey Thorn is releasing a Christmas album (in October)