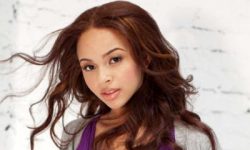 Alexis Jordan's 'Happiness' has been unveiled as the official song of the FIFA Women's World Cup.

Jordan said of the choice, "I am honoured that ‘Happiness’ has been chosen. The FIFA Women's World Cup is a special event that unites and inspires people and cultures all around the world. 'Happiness' is a song that touches everyone uni­ver­sally and cel­eb­rates one of our greatest emotions."

The singer will perform the track at the closing ceremony on July 17 in Frankfurt.