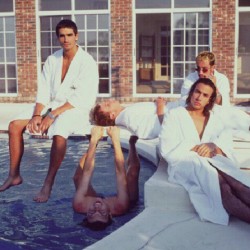 On-again, off-again Backstreet Boy Kevin Richardson has been talking about what the new BSB album will be like. Things do not sound promising.

"We met with a producer, Martin Terefe — he did Train's 'Hey, Soul Sister' and Jason Mraz's 'I'm Yours,'" he told MTV. "We brain­stormed, and then woke up the next day and went into the studio and wrote a song in like an hour. It felt really good, and so we think it's the right fit. And hopefully, he's going to produce the entire record."

"We all discussed, we want this to be a personal record," he continued. "We want it to be authentic to us and who we are and where we're at in our lives.”

Well that should temper expect­a­tions slightly.