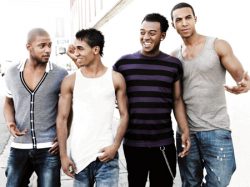 JLS have spoken to the Daily Star about the overly-friendly mothers of some of their fans, with JB claiming that they put their "hands down your pants".

“They use their daughters as scape­goats," he suggests. "[They say] ‘Can my daughter have a pic with you?’ and then they get right in there, seriously, hands down your pants, front and back. They don’t care."

One incident saw a woman "put her hand on Oritsé’s bum", according to Aston.

He continues: "Not just on his bum, she properly went in through his boxers and up."

JLS' new single, 'Proud', which is the official song of this year's Sport Relief, is out this week.