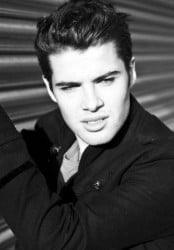 According to Music Week, that slightly dodgy Joe McElderry covers album 'Classic' has taken an early second place in this week's chart.

Will Young's not unamazing fifth album 'Echoes' is at Number One, while 'Jealousy' also makes a strong showing in the Top 5 on the singles chart. The singles update, bizarrely, also shows entries from 'American Idol' con­test­ants Scotty McCreery and Stefano Langone, while Olly Murs and Calvin Harris fight it out for the top spot.

If the Joe McElderry album holds in the runner up position, it would also mean that Adele's '21' would spend its first week outside the top 2. We are surprised by this every week but there are, stag­ger­ingly, some people who still don't own the Adele album.

Take That — When We Were Young (The Three Musketeers Version)