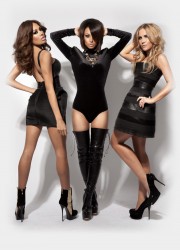 Sugababes have premiered their new single in an advert for 'Nokia N8 Pink' phones.

The advert features a 1:04 minute clip of 'Freedom', which will be the first single taken from Sugababes' as-yet-untitled eighth studio album. A premiere and release date for 'Freedom' has not yet been announced.

This is only the second in a long line of expected Sugababes brand tie-ins. When relaunch­ing them­selves as Sugababes 4.0, they were sure to introduce their new member Jade Ewen to the world via a series of adverts for the computer operating system Windows 7. Our favourite is the one where Heidi and Amelle make Jade a birthday card.

Let's be absolutely clear on this.