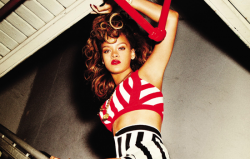 Speaking to Kempire Radio, the part author of Miley Cyrus' hit 'Party In The USA'  said he had been in the studio with David Guetta, Sia, Harmony and Stargate to 'create' some tracks for the album.

Asked what his goal was in the sessions, the man partially respons­ible for Christina Aguilera's 'Vanity' explained: “Rihanna’s a worldwide superstar at this point and she’s per­form­ing in stadiums and arenas now, so I wanted songs that reflected her audience.”

The 'Hypnotico' mas­ter­mind continued, saying: “When I was in London she was per­form­ing at a festival in front of like I’m guessing like 30,000 – 40,000 people… So I didn’t want small songs that only worked on radio, so I tried to do anthemic big stadium themed songs.”

Rita Ora is at Number One; Spice Girls in Top 20 albums