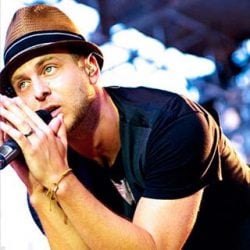 Ryan Tedder has revealed that he was approached to work on Beyonce's 'I Was Here' at the Billboard Music Awards, just a month before '4' was released.

The Diane Warren-penned ballad (obviously) was a late sub­mis­sion for the album and just featured Warren's vocals when it was handed to Tedder.

Talking to Billboard, he said: "We did the entire thing on two airplanes, from Vegas to Boston and then returning from Boston to Vegas two days later. It was abso­lutely bizarre, but the song sounds great."

The man respons­ible for Westlife's 'Beautiful' and Shayne Ward's 'Gonna Be Alright', has also revealed that he's currently working on albums from the likes of K'naan, B.o.B, Cobra Starship and Carrie Underwood, before focusing on the next One Republic album.

You'll like this — some jarring spookpop by a lady named Tala

Brace yourself for one of the pop albums of the year