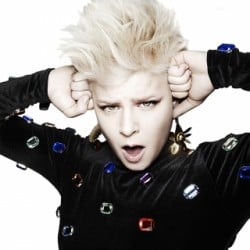 Quite good singer of song Robyn has 'revealed' that she's only just started working on new music and that she's not really sure what she's going to do with it yet to be honest.

"I see people messaging me on my Twitter and sometimes I feel bad because I'm nowhere near finished with the album – it's probably going to be a while before you hear anything new from me," she continued, slowly breaking our hearts.