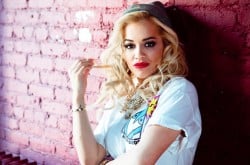 Eurovision: Your Country Needs You con­test­ant Rita Ora has given a 'creative' explan­a­tion as to why her debut album is called 'Ora' in an interview with That Grape Juice.

"In my country ['ora'] means 'time'," she explained. "And it took me quite a while to get this album finished, so I thought it was just a very con­veni­ent name."

"It's cool because it's my name too."

She also discussed the sound of the album, saying: "I feel like it's very different and eclectic, and not every song sounds like it should be on one album. So I think that's why I'm really excited about it, because I never listen to one type of music."

Everyone says that about their albums these days, don't they?