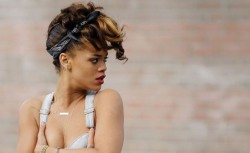 Rihanna's new single will be played for the first time either later this week or the beginning of next.

The first single from her twenty-fifth album in eight years was meant to 'air' yesterday but according to someone from the French radio station that was meant to play it, she decided to delay it all for some reason.

"We were notified that #Rihanna and her staff decided to delay her new single," Benjamin Galouye from NRJ tweeted. "It should premiere later this week."

Then again, rumours are that the song was written by Sia and she then tweeted the following: "Next Monday should feel pretty good."

We wonder if Rihanna will annoy any Irish farmers for the video? That would be good.