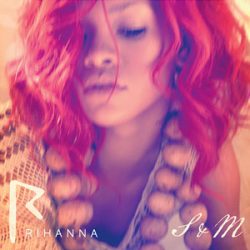 Rihanna has furiously attacked (trans­la­tion: posted a tweet with lots of threat­en­ing exclam­a­tion marks) a radio edit of her single, 'S&M'.

After appar­ently finding out that the track had been renamed 'Come On' for UK radio play via a fan on Twitter, Rihanna tweeted that she was "abso­lutely NOT" okay with the change. And this was before she found out that all the ref­er­ences to sex, whips and chains had been cut as well.

The edit wasn't actually the work of Radio 1, but Rihanna's label Def Jam. So either someone forgot to tell Rihanna about it, or this abso­lutely not contrived outburst was a sly bid to make the headlines.

The uncensored version of 'S&M' will be played on spe­cial­ist shows with an "appro­pri­ate intro­duc­tion" according to a BBC spokes­per­son, but "it is common practise to play radio edits of certain tracks in the daytime" as "younger audiences are listening".