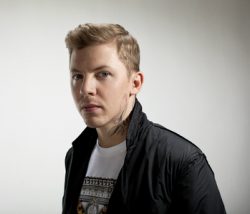 Professor Green has cri­ti­cised the BBC's selection of Script 'frontman' Danny O'Donoghue for a judging role on The Voice ahead of Will Young.

Green sum­mar­ised the whole sorry affair saying "no one knows who Danny is. That's really shit that they dumped Will for him".

According to The Sun, the pair developed an admir­a­tion for each other when they appeared on The Jo Whiley Music Show in November.

Green added: "He would have been perfect for that job. He really knows what he is talking about when it comes to making music."

A Newsdump for 4 January 2012: From lots of popstars in motion to Example's romantic devotion